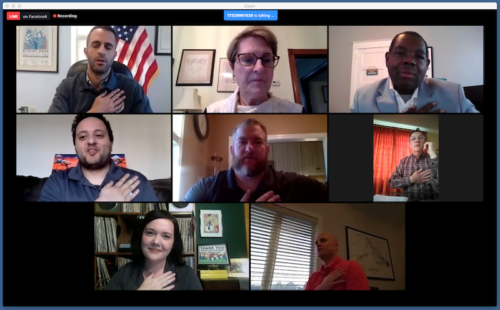 At its second official meeting of the COVID-19 era Wednesday night, the Red Bank council plans to consider awarding a contract to rebuild much of White Street and the adjoining municipal parking lot.

The fiscal impact of the pandemic loomed as officials held their first-ever online-only meeting of the borough council April 7.

The meeting, the council’s first since March 11, was carried live on Zoom and Facebook Live, where a recording remains. About 28 people watched, and another six or so listened in via phone, said Business Administrator Ziad Shehady.

At that session, the council approved $1.7 million in new temporary appropriations to cover wages, salaries and other operating costs.

That sum and other temporary appropriations will have to be “baked into the cake” of the town’s full-year budget, said Councilman Michael Ballard, who chairs the budget-writing finance committee. And with a steep drop in revenue looming as a result of the pandemic, he expressed concern.
“We’re going to see a change in our revenue coming soon,” Ballard said, “and I’m fearful as we move forward of how we’re going to support our obligations.”
Normally, he said, towns have three months of operating under a temporary spending plan followed by “nine months to adjust” under a full-year budget, but Red Bank is going into the crisis with “very little wiggle room.”
“We should be very cautious about our appropriations,” he said.
Mayor Pasquale Menna said he “didn’t disagree,” but said that as in past emergencies, such as the aftermath of Hurricane Sandy in late 2012, the council could “trimming and or adjusting it as the case may be.”
Normally, this is the time of year that a new budget would be introduced, but because of the crisis, the Murphy administration has extended the deadline to the next regularly scheduled council meeting after April 28, which for Red Bank is May 13.
So while a budget is not on Wednesday’s agenda, here’s some of what is:
• Awarding a contract to Lima Charlie of Freehold for the reconstruction of White Street and the parking lot. The firm’s $975,975 bid was the lowest of six, and nearly $207,000 below the next-lowest, submitted by James Lentile Inc. of Marlboro, according to the pending resolution.
For more on the project, see this redbankgreen article.
• Hiring James Courtney and Andrew Todd as “specials,” or part-time, police officers.
Here’s the full agenda.
The meeting is scheduled to begin at 6:30 p.m. Information on how to participate in or listen to the meeting is here.
Posted on April 22, 2020 at 7:25 am, filed under COVID-19 Pandemic 2020, Featured, Government, Health, RED BANK, Taxes and tagged budget, coronavirus, council, covid-19, michael ballard, nj, public meetings, red bank, temporary appropriations, ziad shehady, zoom. Bookmark the permalink. Follow any comments here with the RSS feed for this post. Trackbacks are closed, but you can post a comment. Email this story.
PREVIOUS: VIRUS UPDATE: RECORD DEATHS REPORTED NEXT: VIRUS UPDATE: DATA POINTS TO IMPROVEMENT