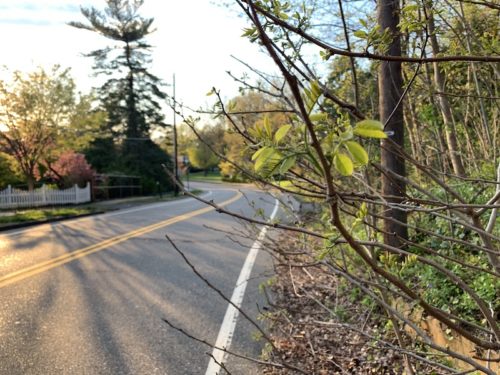 A lovely sunset on Harding Road in Red Bank Tuesday evening served up a reminder that springtime continues without regard to the pandemic. (Click to enlarge.)

With many measures showing improvement in the fight against the COVID-19 pandemic, Governor Phil Murphy began laying the groundwork Wednesday for New Jersey’s defense against a second wave in coming months.

The state health department’s COVID-19 online database reported 314 new deaths statewide, for a total 5,063 since the first death on March 10. The disclosure came a day after the single largest death toll of 379 was reported Tuesday.

Included in the latest report were deaths of 7 Monmouth County residents, which raised the county’s loss of life in the crisis to 251.

• In response to a reporter’s question, Murphy said the state is not allowing non-symptomatic residents to be tested for COVID-19 at the drive-thru test sites in at the PNC Arts Center in Holmdel and in Bergen County.

A broadening of the testing at PNC had been mistakenly reported on Twitter by the Monmouth County Prosecutor’s office earlier in the day, an announcement that was amplified by media. Murphy said asymptomatic testing is not permitted under Federal Emergency Management Administration regulations without a waiver.

• Murphy said the state Office of Emergency Management had taken delivery of 500 ventilators it had purchased.

But contrary to forecasts earlier this month that the state could soon need one ventilator for every patient in intensive or critical care, the percentage of those patients needing the lifesaving devices has in fact been declining.

State Health Commissioner Judy Persichilli said the percentage, which got as high as 97 percent, was at 79 Tuesday, “the lowest percentage we’ve had in over four weeks.”

•  Persichilli and Murphy said the additional ventilators, as well as newly created field-station hospitals and retrofits to the existing healthcare system to prepare for a “surge” of patients, may yet be needed, if not immediately, then possibly in the fall, should the virus coming roaring back.

“Are we going to need any of these ventilators over the next weeks or months? We may. Again, I hope not,” he said. “But here’s what we also worried about: What if this thing comes back?

“The likelihood of it coming back is pretty high,” he said. “We may need the capacities we’re preparing for… even if we do everything right.”