The property at 96-98 West Front Street is approved for offices and apartments. (Photo by John T. Ward. Click to enlarge.)

Red Bank may get a small addition to its riverfront Maple Cove tract under negotiations authorized by council in executive session Wednesday night. 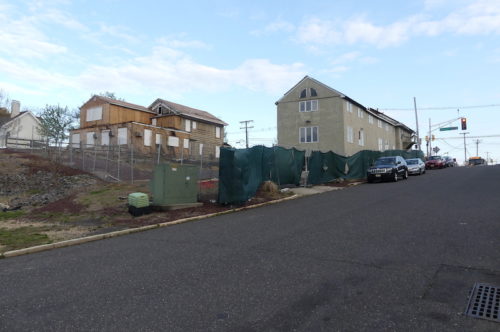 A view of the site from the end of Maple Avenue. It abuts the small parking lot for Maple Cove, part of which can be seen at left. (Photo by John T. Ward. Click to enlarge.)

In the final seconds of Wednesday night’s online council meeting, borough Attorney Greg Cannon said the governing body would go into executive session to discuss “a possible acquisition in connection with the development of property at Maple Avenue and West Front Street.”

But no, the borough is not buying the site, where two long-vacant buildings have been decaying for years, just up the hill from the Maple Cove natural area and kayak launch.

In July, 2018, the borough planning board approved developer Mark Forman‘s plan to demolish the two buildings on the northeast corner of the intersection and replace them with a four-story, 26,000-square-foot building with ground-floor commercial space and eight luxury apartments.

The project, dubbed “Rivermark at Maple Cove,” will have underground parking for 43 vehicles.

During the hearing, project attorney Kenneth Pape said Forman had “offered to convey to the borough for no consideration” the so-called “tail end” of the property below a steep slope and adjoining the Navesink River. That offer was built into the board’s resolution of approval as a condition to be satisfied.

In response to an inquiry by redbankgreen, Cannon said the executive session – continuing the public Zoom and Facebook meeting, but without the public – “pertained to the parameters of those negotiations.”

Via email, Cannon said he had “received guidance from the governing body to continue those negotiations, and depending upon their outcome, there will eventually be a developer’s agreement on the public agenda that may include those land transfer terms.”

The property would be “an addition to the Borough’s growing recreational riverside land inventory,” Cannon said. The Rivermark portion abuts a small parking lot for Maple Cove.

As reported by redbankgreen, Forman sold the project for $1.8 million in December to an entity called 96-98 West Front Street LLC, according to a deed filed with Monmouth County. New Jersey records show the LLC was created in September at an address on Conover Lane in Middletown, listing Vladimir Shamaev as the managing member.

Preparation for demolition work at the site was underway in March when the COVID-19 crisis hit, leading to an executive order by Governor Phil Murphy that all non-essential construction cease.

Also as part of the planning board approval, Forman agreed not to use Maple Cove as a staging area for construction.