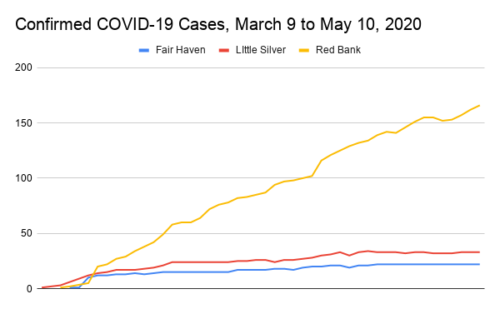 At the same time, thousands of new infections were recorded, with Red Bank’s total remaining on stubborn incline.

Over two days, Monmouth County lost 14 more residents to COVID-19, for a total of 443, New Jersey Health Department data showed Sunday. Statewide, 9,255 deaths have now been attributed to the pandemic.

In Monmouth County, the deaths of 334 longterm care patients or caregivers have been confirmed, a two-day increase of 12, accounting for more than 77 percent of the county’s fatalities. Statewide, slightly more than half off all deaths have been tied to longterm care facilities.

On Sunday, 166 Red Bank residents have had confirmed cases of COVID-19 since the start of the pandemic, Monmouth County reported, a two-day increase of 9. The borough’s total number of positive cases has been growing by an average of more than 3 per day since the first was reported March 20.

A separate state report posted Sunday showed an additional death at the Hackensack Meridian at Red Bank nursing facility (formerly Chapin Hill) on Chapin Avenue, for a total of 10.

Red Bank’s only other such facility, the Atrium at Navesink Harbor, has had 4 deaths, with no increase since the state began releasing facility-level data April 20.

Neither the state nor county has reported fatality totals by town other than at longterm care facilities.

Separately, the county government reported 6,838 confirmed COVID-19 cases Sunday, an increase of 157 from Friday. Here’s the case breakdown by municipality:

The state reported continued drops in the number of patients hospitalized, in critical care and on ventilators.