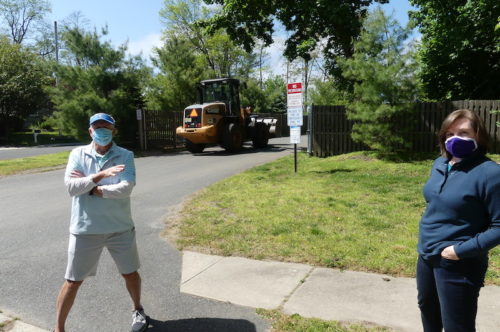 William Street neighbors Bob Donnelly and Jen Spitz, masked up and social-distancing at the brush site in late May. (Photo by John T. Ward. Click to enlarge)

At issue is an easily-overlooked site at the corner of Hendrickson Place and William Street, on the east side of Fair Haven Fields playing fields and courts.

Behind a gate that’s closed during off-hours lies a giant pile of accumulated brush clippings picked up seasonally in Fair Haven and Rumson.

Twice a year, for about two weeks at a time, a contractor grinds and removes the brush, said William Street resident Jen Spitz, who has challenged the location of the facility for the past five years. Mazza Mulch of Tinton Falls currently holds the $73,000 contract.

Under terms of a 2012 interlocal services agreement deal inked renewed last December, Rumson dumps its residential brush at the site, saving hundreds of gas-guzzling trips to a facility in Tinton Falls. In return, Rumson maintains Fair Haven’s parks, and provides street-sweeping and other public works duties.

When the deal was first made, Fair Haven officials said the town would save some $500,000 by avoiding the need for a new street sweeper.

Since 2012, when Hurricane Sandy littered the peninsula with felled trees and brush, the number of truck trips in an out of the site has generally trended downward, from 566 in 2015 to 314 in 2018, said Spitz, citing data she has compiled from borough records.

But Rumson typically accounts for two-to-four times as many truckloads as Fair Haven, her records show. That adds up to hundreds of truck runs a year “that are not serving this neighborhood,” Spitz said.

Over the years, the borough has gotten Rumson to cut down the number of months in which it dumps material, to six, from nine or ten.

But before the deal with Rumson, activity at the site was “manageable,” said Bob Donnelly, of William Street. When he moved in eight years ago, “you were kind of aware of it, but it wasn’t overwhelming,” he said. “Now, it’s a monstrosity.”

The operation creates a host of negatives, foremost among them the danger of large trucks navigating narrow streets near ballfields used by numerous children in a bike-loving town.

“This morning, I’m sitting on the porch, and here comes a tractor-trailer, with boys on bikes riding alongside it,” said Carolyn Colleran, of Hendrickson Place.
“It’s loud, it’s dangerous, it doesn’t belong in the neighborhood,” she said. “It’s time for it to move on.”

To access the site last Friday, an 18-wheeler had to execute a series of maneuvers that included a K-turn and a reverse S-turn and took more than five minutes to complete.

As seen in the redbankgreen video above, even with two police cars on scene, a pair of children on bikes rode in behind the truck as it was preparing to back in, though there was no indication that the driver didn’t see them.

Donnelly said that while the truck drivers are careful, “it is just frightful” to see kids so close to the the large vehicles.

In response to complaints, the borough has bolstered police presence, escorting many of the trucks into and out of the site. But it’s not enough, said neighbors.

Spitz called the police presence “a band-aid” offered by the council for the grinding sessions, one that “does nothing for the other 48 weeks of the year that bring 300-plus additional trucks to the neighborhood.”

Neighbors say the grinding operation throws particulate matter into the air, along with mold and whatever fertilizers and pesticides the brush contains. Spitz likens the smell to “mulch, but on steroids,” and sees possible links to respiratory ailments reported by neighbors.

One of her children has asthma, and she worries about the dust, which coats everything, Spitz said.

According to minutes of council meetings, borough officials have defended the deal with Rumson as positive in terms of reducing carbon footprint and saving both towns money.

At a council meeting a year ago, Mayor Ben Lucarelli told Spitz that the borough had “looked into relocation of the brush site,” but was rejected by the New Jersey Department of Environmental Protection. According to the meeting’s minutes, he also said the deal “brings dollars” to the borough.

Neighbors have attended about a dozen council meetings over the past five years, met privately with borough officials, and circulated a petition calling for the closure of the site, said Spitz.

Though many borough residents regularly use the fields, the existence of the facility and its level of activity have been a revelation to some.
“I was stunned when I swung by yesterday to observe 8 eighteen wheelers in and surrounding the site,” Councilwoman Meg Chrisner-Keefe wrote in a comment on the Fair Haven, NJ Facebook page this week.

A five-year borough resident who stopped her SUV near the site told redbankgreen she came by just to find out what everyone was talking about.

“We’re in the park here every day, and we had no idea this even existed” until she started reading complaints on social media, said the woman, who withheld her name. “And then seeing the tractor trailers, with all these kids – it’s crazy.”

“Witnessing this in person gives proper scale to the insanity of the project,” a resident wrote on Facebook.

Spitz said she and her husband, Michael, found out about the station, which abuts their property, only after they bought it in 2013.

They’d been delighted, she said, to find a place that backed up against Green Acres property that could never be developed, under state law.

“We were like, ‘this is amazing.’ I grew up in the woods, so to me, this was a little slice of heaven,” she said.

No one had disclosed, however, that a loud, messy operation, concealed by a berm, would be conducted just yards beyond their property line, making use of their backyard unusable for weeks at a time.

She learned of the grinding two weeks after the birth of the first of her two children. “I was sleep-deprived and I was like, what is all that noise?'” she said.

At a council meeting a year ago, Spitz played an audio recording she’d made in her backyard during the grind, and told officials that the molding is separating from the walls in her home because of vibrations.

“I expect the committee selection will occur in the coming weeks and begin meeting,” Rodriguez told redbankgreen.

In her Facebook comment, Chrisner-Keefe said “both short and long term solutions need to be explored.”
To Spitz, what needs to be done is clear.
“I want it gone,” she said. “Put it on a road that’s intended to handle trucks this big.”
Posted on June 5, 2020 at 2:48 am, filed under FAIR HAVEN, Featured, Government, Home & Garden, Land Use & Zoning, Politics, Public Facilities, Real Estate, RUMSON, Streets & Roads, Taxes, Utilities and tagged bob donnelly, brush, dpw, engineering, Fair Haven, grinding, jen spitz, nj, Rumson, shared services. Bookmark the permalink. Follow any comments here with the RSS feed for this post. Trackbacks are closed, but you can post a comment. Email this story.
PREVIOUS: RED BANK: KNOCKOUT WEATHER FOR… SUNDAY NEXT: PUBLISHER’S NOTE