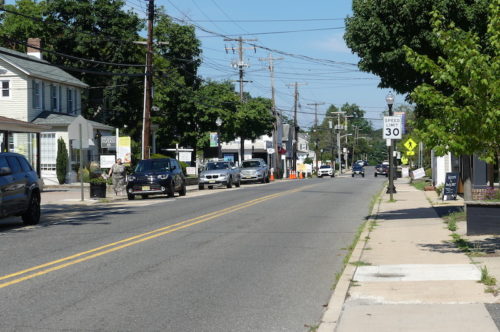 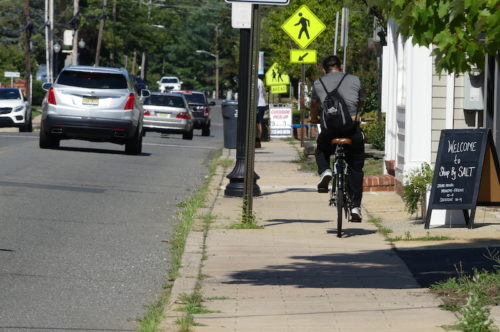 “People ride the sidewalks because the street’s not safe,” a bike-safety expert told the council. (Photo by John T. Ward. Click to enlarge)

As outlined by borough Engineer Rich Gardella during a council workshop session July 13, designated bike lanes would run between Lake Avenue and Hance Road, where there’s sufficient width for them in both directions.

From Hance to Buena Vista Avenue, at the Rumson border, “share the road” sharrows would be painted on the roadway, rather than dedicated bike lanes, Gardella said.

Monmouth County is planning to repave River Road, and the road markings and signage for the bike facilities are to be included in the bid request, Gardella said.

At that session, Lucarelli voted to break a council tie to authorize the county to move ahead with the bid.

For Monday night’s session, conducted over Zoom, Lucarelli brought in Gail O’Reilly, who previously worked with the borough in getting bikes lanes installed on Ridge Road through Fair Haven and Rumson.

O’Reilly said  the plan is “absolutely consistent with” the borough active transportation plan, which she worked on in 2017. The primary aim of the ATP as it pertains to River Road was to increase the safety of pedestrians, she said.

“We’re trying to influence the behavior of everybody who has to share the road there,” she said.

“The plan that’s before us does that exactly as it was laid out,” she said. “It’s a blended approach that asks everybody to behave as well as possible.”

Steiner, who said her organization has “always looked at Fair Haven as a kind of model” biking community, echoed that objective.

“People ride the sidewalks because they find the road’s not safe,” she said. But adding bike lanes and sharrows won’t unleash a sudden “wall of riders” through the district,” she said.

But Councilwoman Betsy Koch, who had previously called the sharrow plan “a recipe for disaster,” said River Road has a “huge amount” of driveways and cross streets. That’s futher complicated by motorists getting into and out of parked cars, she said.

Koch’s late husband, Councilman Jerome Koch, died after he was struck by a vehicle while cycling on River Road in November, 2014.

Other council members said they’d like to see the speed limit reduced to 25 miles per hour, from the present 30.

O’Reilly said that under a “design speed” concept, environmental cues such as narrowed lanes and sharrows,  “you’re basically telling motorists to slow down.”

But Councilwoman Meghan Chrisner-Keefe said she is “hard-pressed to imagine myself riding down River Road with my children.” That, she said, “will require serious changes in behavior” on the part of motorists.

“I am way more concerned about a car I’m driving by than a car coming up behind me, because of that car door opening,” he said. “A bike lane or sharrow is not going to solve for that.”

He also echoed Koch’s a concern about the number of cross streets and driveways along the roadway, and said the bike lane and sharrows could end up “potentially causing more confusion.”

But “to abandon River Road to only the cars is a scarier alternative,” said Tracey Cole of Grange Avenue.

Councilman Jim Banahan, another cyclist who previously said he would avoid the business district while biking, did not weigh in on the issue.

But “to abandon River Road to only the cars is a scarier alternative,” said Tracey Cole of Grange Avenue.