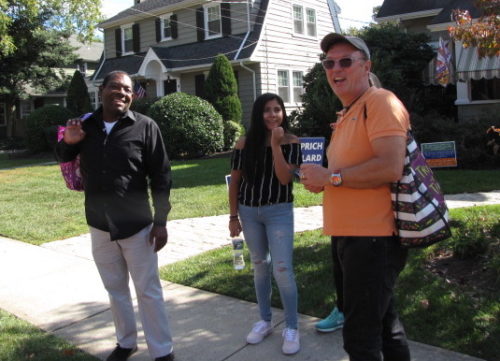 At issue are competing calls for investigations following a release of internal emails to redbankgreen in early August.

Included were emails between Borough Administrator Ziad Shehady and several council members, as well as borough Attorney Greg Cannon, in which Shehady warned of “meddling” and “sabotage” by Councilman Ed Zipprich in the then-pending bid process to select a trash hauling firm for a new three-year contract.

The issue has pitted Zipprich and Councilman Michael Ballard against four fellow Democrats.

Zipprich contends the emails smeared his reputation and constituted an illegal leak of privileged communications. He and Ballard, his running mate in this year’s election, have demanded a “cybersecurity” investigation to identify the leaker, who communicated anonymously with redbankgreen via an encryption service.

Councilmembers Erik Yngstrom and Hazim Yassin, by contrast, contend the leaked material was largely releasable subject to any Open Public Records Act request. They object to an investigation to find the source.

Instead, they have said Zipprich’s alleged contact with a prospective bidder, while the bidding was underway, is what needs investigating.

A proposed resolution authorizing the investigation requested by Zipprich and Ballard has lain dormant since August, despite repeated requests by Ballard that it be put on the council agenda for a vote.

Yngstrom objects to scheduling the vote because a second attempt to hire a trash hauler is now underway, with a bid deadline of November 17. He said an interim vote could “cloud” the process.

On Wednesday, Menna said the council remains “stuck in neutral” as a result of the standoff. What’s needed, he said, is a “not an investigation first, but a legal opinion letter concerning what options the council does have on theses  iussues and the remedies if any, and what  are the pros and cons of proceeding.”

That opinion can’t be offered by Cannon, because his emails were among those leaked. So Menna suggested Barry Cooke, an attorney with the Wilentz firm and borough attorney in Avon-by-the-Sea, be hired solely to offer a legal opinion “guidance on how to proceed… and what the legal ramifications may or may not be.”

Menna said he has “no personal relationship” with Cooke, with the council approval and would ask him for his hourly rate.

Zipprich called it a “wonderful solution,” and Ballard said the suggestion “begins to remove the cloud that’s kind of been hovering over us.”

“So we have a game plan, I hope,” Menna said, adding that he would have a proposal for discussion at the next council meeting.