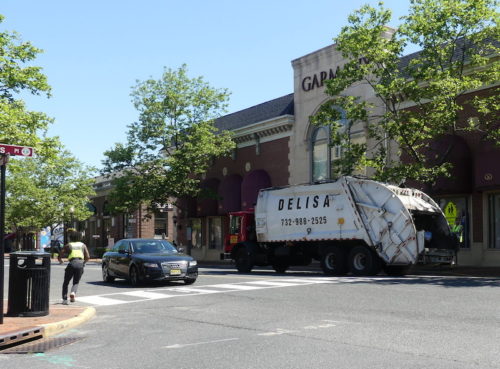 DeLisa Demolition won the borough’s trash contract, now up for rebid, in 2015. (Photo by John T. Ward. Click to enlarge.)

Red Bank Business Administrator Ziad Shehady has asked elected officials to discuss, in private, what he calls an effort by a council member to “sabotage” the process of awarding a new trash-hauling contract, redbankgreen has learned. Councilman Ed Zippich in 2018, above, and Ziad Shehady in February, below. (Photos by John T. Ward. Click to enlarge.)

The allegation is contained in documents, several of them less than 12 hours old, that redbankgreen received Tuesday night from an anonymous sender using an encrypted email service.

The authenticity of the documents could not be immediately verified. But Shehady, in response to a redbankgreen inquiry, said the documents appeared “at a quick glance” to be authentic, though he had not closely scrutinized them closely for possible changes from the originals.

He also said that some of the documents “may be confidential so they should not have been forwarded to anyone outside of the original recipients.”

One is an email Shehady sent at 2:56 p.m. Tuesday to Mayor Pasquale Menna and unspecified council members, as well as borough Attorney Greg Cannon. In it, Shehady wrote, in part:

It seems to me there is an effort to sabotage this bid process, which already included a process to address prospective bidder concerns or questions and included a mechanism for the Borough to issue an addendum to the RFP,  but conveniently this letter has arrived after that timeframe.

The chain concludes with a July 17 email from from Zipprich to Shehady that “suspiciously and curiously includes very similar concerns & issues” about the bid parameters also cited by DeLisa, Shehady wrote Tuesday.

Among the issues in both are a borough request that bids include trash pickups at borough schools five days a week, up from the current four times a week; questions about who would be responsible for supplying dumpsters at apartment and condo complexes; and the cost impact of having the hauler responsible for discarding “white goods” appliances, a task now handled by the borough public utilities department.

“[I]f I am reading the specs correctly, you are asking the potential contractor to pick up ‘the down side risk of negative revenues,'” Zipprich wrote. “I am unclear as to what contractor would be willing to take that risk as the market has become so unstable over the past 5 years.”

DeLisa’s August 4 letter includes handwritten notes and questions in the margins, including a notation that says “Ed -” followed by Zipprich’s cellphone number.

Neither Zipprich nor DeLisa responded to redbankgreen requests for comment late Tuesday morning. Their responses, if any, will be included in updates to this post.

Among the questions we asked Zipprich was whether the concerns he expressed were those of DeLisa, and if so, why he had not disclosed that in his July 17 email.

We asked DeLisa, based in Tinton Falls, was why, if the company had so many concerns about the terms of the bid, it did not raise them at a “pre-bid conference” scheduled for July 1 to hear those types of concerns. That event was not held because no industry players showed up, Shehady told redbankgreen.

In 2015, DeLisa Demolition privatized what had long been municipal trash and recycling work with a three-year $1.49 million bid that underbid a handful of other contenders. The contract was later extended by two years under and option held by the borough.

The new contract would be effective September 1, and will also be structured as three-year deal with as two-year option, Shehady has previously said.

Apparently, Shehady’s suspicions about Zipprich’s interest in the bid terms was immediate.

Minutes after receiving Zipprich’s July 17 email, Shehady forwarded it to Cannon with the note, “Just for the record, because of my experience with him, I would not be surprised if he tries to sabotage this bid.”

Three days later, in an email to Cannon that was blind-copied to Menna and four other council members, Shehady wrote: “Greg, I just learned that, as suspected there is some behind-the-scenes meddling. Apparently, he is relaying complaints from Tommy Delisa that either he has heard from him directly or through Maria.”

Zipprich and Ballard are up for re-election in November, facing Republicans Jonathan Maciel Penney and Brian Irwin.

Shehady has asked that the council discuss the situation in executive session at its monthly workshop meeting Wednesday evening. Meantime, “As of now, there are no changes to the bid process and it is going ahead as it has been planned,” he told redbankgreen.

Here are the documents: