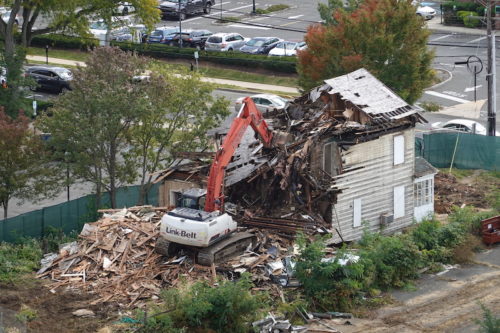 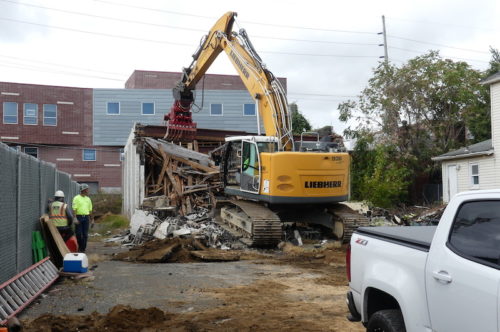 A crew from Catco Demolition Services demolishing the former prop shop at the Two River Theater, seen in the background. (Photo by John T. Ward. Click to enlarge.)

• At the northeast corner of West Front Street and Maple Avenue, a crew tore down the first of two buildings slated for removal, as seen in the reader photo at top, taken from Riverview Towers.

The site is approved for a four-story, 26,000-square-foot building with ground-floor commercial space, eight luxury apartments and underground parking for tenants.

Developer Mark Forman obtained planning board authorization for the project, then called Rivermark, in July, 2018. He later sold the site and approvals to an entity called 96-98 West Front Street LLC for $1.8 million, according to a deed filed with Monmouth County.

First to be demolished was 96 West Front, a former dentist’s office next door to the Red Bank Public Library. A commercial building on the corner is also slated for removal.

• Over at 38-42 West Street, a crew from Catco Demolition Services took down the former Chavant Inc. building.

Home to the modeling clay company from the 1960s, the building and a house next door were acquired by the Two River Theater in 2004.

The theater used the one-story structure to build stage sets and props. But theater officials said the space was inadequate, with a ceiling height of just 12 feet, whereas many set pieces need to be 25 feet tall. A theater executive also described the difficulty of moving completed pieces to the theater itself, a process that was weather-dependent.

Under the plan approved by the zoning board in 2017, the theater recently completed construction of a 36,000-square-foot addition to house backstage facilities for rehearsal, costume-making and scenery building in a structure that’s 50 feet tall.

The Chavant building and house were to be removed and replaced by parking, under the plan.

Chavant is now based in Wall Township.