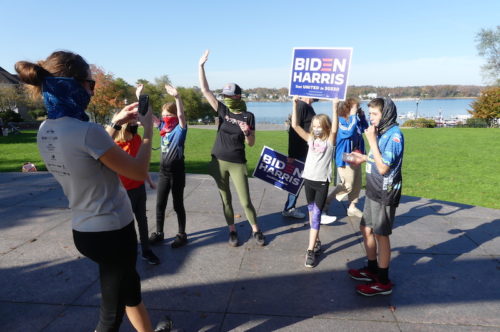 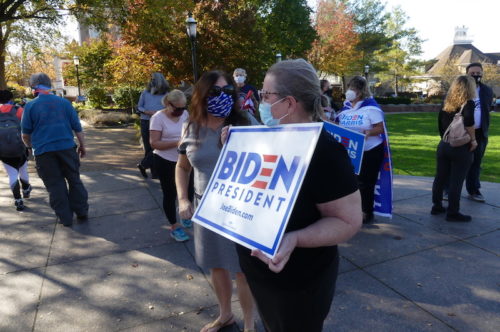 Alberto Garcia, Red Bank, an immigrant from Spain who obtained American citizenship this year and voted for the first time last week: “I’m extremely happy and I think it’s a new beginning. It’s been kind of a nightmare of division, but this is the United States of America, and there’s a lot of work that needs to get done. I can agree with a lot of things the Republicans say, but [Trump] was really, really hurting the country, and it’s going to take some time to rebuild it. We have as long way to go, but I’m very excited.”

Joel Jannone, Red Bank: “I thought all the way that [Biden] was going to win this. There’s still a roadblock with the Senate in the hands of the other party, but I just want us to get away from the preoccupation with craziness, the 24/7 interference with daily life.”

Jenifer Hagon-LaFountain, Brick Township, said she felt “relief, excitement, but somewhat guarded, also, in anticipation of possible fallout in the coming weeks and months – unrest among those who are unhappy with the outcome.”

Darlene Schweitzer, of Middletown: “I’m looking for a return to common decency and civility, and caring for everyone instead of just ourselves. I think people sold their souls for $50 in recent years.”

Areli Campos, a freshman at Red Bank Regional High came to the event after participating in a volunteer  neighborhood cleanup effort in town: “I’m very happy, because I feel like [Biden] understands the younger generation, so I’m really thrilled.”

Liz Byham, of Pine Beach (seen in center of top photo): “We are very anti-Trump Democrats in our household, so we felt relief, and just pure joy” when they heard the outcome. “We went through this, like everybody else, four years ago: the kids were so excited – ‘the first female president!’ And that didn’t end well. So we’ve been trying to keep the expectations a little lower this time. And until Biden actually sets foot in office, you have to keep a little bit in reserve. But I am so relieved to put these four years behind.”

Kim Nielsen, Brick Township: “I think I have a little more hope for my kids’ future. There’s part of me that knows we still face a long haul and there’s a lot that has to change about our country. But this is just one step of many in the right direction.”

Patricia McCrink, Red Bank: “As much as people are celebrating, half of the country is not, and that’s not good. And it’s so passionate on both sides. [Trump’s] just going to burn the place down on his way out. But there’s hope.”

Councilwoman Kathy Horgan, Red Bank: “The long nightmare is over. You know, I’ve lived a long time and I’ve been through a lot of presidents. Our country’s been up and down. But I’ve never seen anything like this [administration], and it really made me worried for our country, what we were becoming. That’s not who we are. Now, it’s who we are: to have respect for each other, but also for our institutions.”