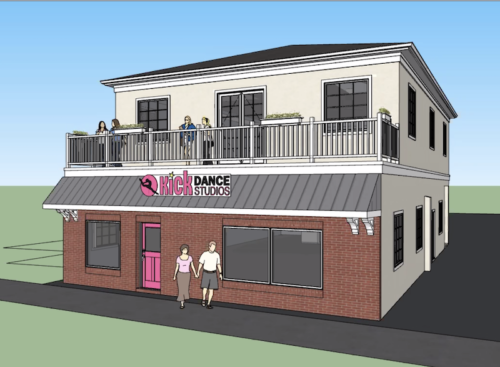 The approval allows an upward expansion of the existing structure, seen below. (Rendering by Anthony Conduouris; photo by John T. Ward. Click to enlarge.)

A one-story dance studio in Fair Haven is set to make a grand jeté to a second floor following zoning board approval Thursday night.

Board Chairman Todd Lehder praised the Kick Dance Studios plan as a harbinger of the borough’s future. He was also the only board member to vote against it. 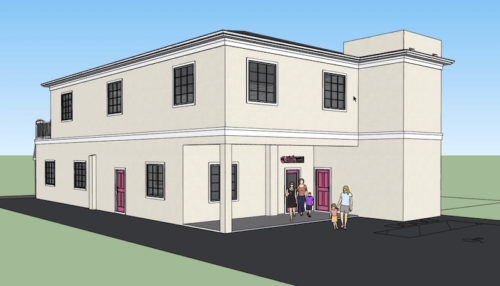 Lehder’s opposition, he made clear, had nothing to do with studio owner Vanessa Berry’s plan for an 1,800-square-foot second story at 611 River Road.

She’s operated Kick studio there for six years, and plans to bring over her original studio from Rumson, which is in a building slated for demolition.

Instead, Lehder found himself alone in pushing for a deed restriction that might constrain a future owner in terms of parking.

Over the course of two hearings, Berry, an attorney and an architect fielded questions about her plan, which she said would provide ample space for dance movements.

Students aged 12 to 15 years old would train on the second floor, with the lower level used by younger students, Berry told the board at its November 22 meeting.

The upper level “would allow them to dance what we call ‘full out’ – to be able to do leaps and turns,” she said.

The original plan, however, called for a second floor flush with the existing first floor, prompting misgivings from board members about the appearance.

Moreover, Lehder noted, the property sits in an overlay zone recently created under an affordable housing plan, which would allow some River Road commercial property owners who meet specific conditions to add residences to their buildings.

To comply, first-floor commercial uses need to be set back 15 feet in front, and the second and third floors have to be set back an additional 12 feet.

Lehder and others raised the prospect of adjoining and nearby properties eventually being redeveloped with deeper setbacks than Berry’s building.

“This building, as I understand it, currently sits a foot and a half from River Road,” Lehder said in November. “This is going to be a very imposing structure.

“This is my biggest concern, the inconsistency with what we’ve decided we’re going to do elsewhere,” he said.

Lehder, a land use attorney who also chairs the planning board and helped craft the overlay zone, suggested the upper floor be set back, even if it could not comply with the overlay standards.

At Thursday’s session, conducted via Zoom, Kick architect Anthony Condouris unveiled a revised plan. The second story would now be “slid back” nine feet in front and cantilevered at the rear, creating a covered entryway that will serve as the primary access to the studio, he said.

A balcony created in front won’t be used for classes, Berry said.

Board members praised the changes. Councilwoman-elect Laline Neff, who last month called the facade ” too imposing,” said the new version “looks much prettier. The visual difference is very significant.”

“Aesthetically, I love the way it sits among that little group of buildings,” said John Ridgeway. “I think it’s a great little thing you’ve got here.”

During the public comment session, Alicia Winick of Lake Avenue said Berry has been “an integral part of the community” giving children “a safe place to grow and explore” creativity and encouraged approval.

The proposal required a bulk variance and another for parking, with 12 spaces provided where 21 are required. The board accepted testimony that Kick won’t even need 12. Berry told the board last month that, “pre-COVID, even with four rooms going in Rumson, we never had more than five cars because everybody drops off” their children.

The new structure won’t have any waiting areas: students either walk to the studio or get dropped off by parents who, if they want to watch, may do so via Zoom, she said.
Still, Lehder and other board members expressed concern that a future owner might convert the use to one that overloads the parking lot.

To address that concern, Berry had offered to deed-restrict the property in a way that might require a buyer to seek board approval for parking, even though the intended use of the building otherwise required no variances.

Berry made the offer “because it’s her intention to operate here for a very long time,” attorney Rick Brodsky told the board. She’s “amenable to a condition that any change of use would necessitate” a new owner returning to the board if changing the use.

But board attorney Mike Irene laid out a potential scenario under which a new owner might successfully challenge the restriction in court, prompting several board members who had favored the deed restriction to back away from the idea.

A new owner “would say the approval runs with the land,” said Irene, so a deed restriction “may not achieve its purpose.”

“The market is problem going to take care of the problem,” of future uses, said board member Paul Kinsella. “You’re not going to put a high-volume medical office in there” if you need more spaces than the lot can accommodate, he said.

Lehder  said he felt strongly about the need for the restriction, but ended up stranded on the short end of a 6-to-1 vote to approve.

Immediately afterward, he called Berry’s plan “a tremendous compliment to Fair Haven, and the first building for the future.”