The Atrium at Navesink Harbor as seen from the Molly Pitcher Inn in 2014. (Photo by John T. Ward. Click to enlarge.)

Three residents of a senior assisted-living facility in Red Bank have died of COVID-19 since mid-December, according to data released by the New Jersey Health Department Monday.

The deaths at the Atrium at Navesink Harbor occurred as pandemic-driven hospitalizations, and the need for critical care, rose across Monmouth County. 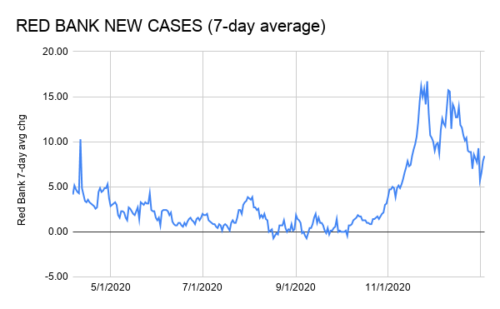 After rising sharply in the first half of December, Red Bank’s seven-day average of new COVID-19 cases has eased. But hospital utilization in throughout Monmouth County continued to rise, as shown below. (Monmouth County Freeholder data. Click to enlarge.)

According to the state health department, four residents of the Atrium, on Riverside Avenue, have died from the coronavirus in a current “outbreak,” which the state defines as one or more COVID-19 infections.

One of those fatalities had occurred prior to December 18 in an outbreak that began September 29, Julia Zauner, a spokeswoman for facility owner Springpoint Senior Living, told redbankgreen last month.

Since then, three more residents have died, according to the state’s update on longterm care facilities: NJ LTC Outbreaks 010421

In addition, the facility has seen 20 residents and 24 staff members contract the virus in the outbreak, the report shows. Fifteen of the resident cases, and nine staff cases, appear to have been detected since December 18.

Zauner did not immediately respond to a request for comment Tuesday morning.

• At the town’s only other longterm care facility, the Hackensack Meridian Health center on Chapin Avenue, the state’s Monday update indicated a current outbreak of 4 resident infections and 10 staff cases, with no recent fatalities.

The 180-bed facility had 16 resident fatalities in the spring as the first wave of the pandemic was surging.

• As of Monday, there were 486 COVID-19 patients in Monmouth County hospitals, up from 465 a week earlier, with 82 in intensive care (up 6), and 63 on ventilators (down 1), the county freeholders reported late Monday.

The county recorded 126 confirmed COVID-19 deaths in December. So far this month, it has seen 17 more.

• In Red Bank, the rate of new infections appeared to slow through the holidays.

After soaring from a seven-day moving average of five or fewer new cases in early November to 15.5 on December 12, the rate of new cases has generally trended down, according to redbankgreen‘s analysis of county data. The rate dropped below 10 on December 24 and remained there through January 2, though it has ticked up again since, according to figures released by the county.

Officials caution the case numbers may be skewed by the holidays, when asymptomatic residents might have put off being tested.

• In their daily update Monday, Monmouth County officials reported these cumulative case totals since the start of the pandemic in March: