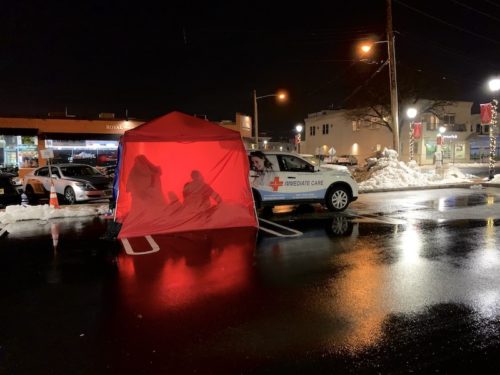 An Immediate Care COVID-19 testing tent in Red Bank’s White Street lot Monday night. The company has been offering free tests at the site for weeks. (Photo by Trish Russoniello. Click to enlarge.)

COVID-19 pressure on Monmouth County hospitals continued to increase in the past week, according to the latest data from the county government.

At the same time, demand for intensive care and ventilators to treat patients with the virus showed slight signs of easing. 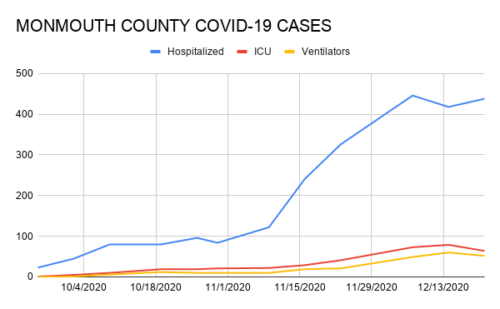 • As of Monday, there were 438 COVID-19 patients in Monmouth County hospitals, with 64 in intensive care and 52 on ventilators, the county freeholders reported late Monday.

That compares to 418 hospitalized, 79 in ICU and 60 on ventilators one week earlier, according to county reporting.

• According to a data report by the New York Times, based on figures released Monday by the federal Department of Health and Human Services, 85 percent of ICU beds at Riverview Medical Center in Red Bank were in use.

The national average was 78 percent, and New Jersey’s was 66 percent, the Times reported.

The county has seen 82 confirmed COVID-19 deaths in the past month.

• Among the recent fatalities was one at the Atrium at Navesink Harbor on Riverside Avenue in Red Bank, the state health agency reported.

Julia Zauner, a spokeswoman for Atrium owner Springpoint Senior Living, told redbankgreen late last week that five Atrium residents have tested positive for the virus since November 16. All were asymptomatic; four recovered, and one died, she said.

The facility is also classified by the state Health Department as having had an “outbreak,” which it defines as one or more cases within the prior 28 days.

Between September 29 and November 24, 15 Atrium staff members tested positive; eight were asymptomatic, seven had “minor” symptoms, and all have returned to work, where all employees are tested weekly, Zauner said.

• Red Bank’s only other longterm care provider, Hackensack Meridian Nursing & Rehabilitation on Chapin Avenue, is also the subject of an outbreak, with four residents and eight staff members testing positive in the last 28 days, according to the latest state update.

The facility saw 16 deaths under prior outbreaks, most of them in the spring, and none in the past month, a separate report on “concluded” outbreaks indicates.

The district has partnered with a medical provider, Back-to-Work Solutions, to “give Red Bank Regional the capacity to identify cases in asymptomatic individuals and help to reduce transmissions,” Moore told redbankgreen. “By testing, we can isolate individuals who do not know they are carrying COVID-19, keep our school safe, and expand in-person programs.”

The testing will be available to all students and staffers, whether or not they have health insurance. Further details will be shared with the RBR community shortly, Moore said.

• In their daily update Tuesday, Monmouth County officials reported these cumulative cases, by town, since the start of the pandemic in March: