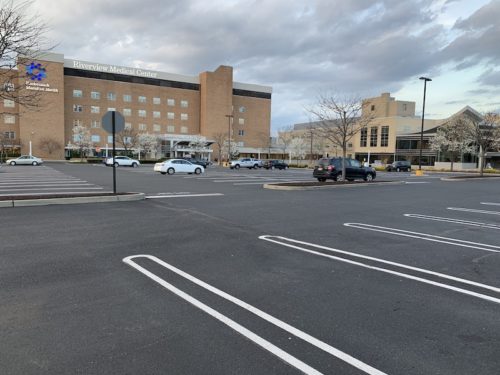 The agreement ends a lawsuit alleging the hospital illegally connected its Blaisdell Pavilion to the borough water system. (Photo by John T. Ward. Click to enlarge.)

Under a “confidential” settlement approved by the borough council last week, Riverview Medical Center will pay Red Bank just $850,000 for water and sewer usage the town contended in a lawsuit was worth at least $5.3 million.

The hospital also will get 10 more years to pay off the obligation, some of which dates to 1984.

Under the terms of the deal, the East Front Street hospital will make 10 annual installment payments of $85,000 starting January 31.

The settlement covers both water and sanitary sewer fees, and does not impose interest charges, it says.

In January, 2019, the town sued Riverview, alleging it had installed  a hidden, illegal water hookup to the Blaisdell Pavilion when the addition was built in 1984. That allowed the hospital to consume more than half a billion gallons of water without payment over more than three decades, the borough claimed.

The suit alleged “knowing, continuous, and blatant violations” of ordinances from 1984 until 2017. That’s when borough officials discovered “an unregistered and inaccessible” meter in the wing connected to the borough supply line beneath Union Street, according to the suit.

Riverview and its parent, Meridian Health Hospitals Corporation, denied the allegations, and said its meters were “installed by and known to the borough.” The meters were always “unobstructed and readily accessible to borough employees,” the hospital said in a court filing in April.

The council approved the mediated settlement last week, but its terms were not fully known until Monday, when redbankgreen obtained the document in response to an Open Public Records Act request.

It says the two parties agreed that the matter “involves arguable and disputed questions of fact and law,” and that Riverview denies any wrongful action.

Among the terms of settlement, which are described as “confidential,” is a provision that borough officials aren’t allowed to speak about it. If they receive an oral or informal inquiry about the deal, they “shall decline to offer any information of any type, and are obligated to merely respond that the matter has been resolved through a settlement agreement,” it states.

The pact can only be released by the borough in response to an OPRA request, and the town is required to notify Riverview of those requests, it says.

In response to redbankgreen questions, borough Attorney Greg Cannon said he could not comment specifically on why it’s labeled “confidential,” given the terms of the agreement.

“Generally speaking, a NJ public entity cannot enter into a wholly ‘confidential’ settlement,” he said via email.  But one “may, as part of the consideration in a settlement, agree to comment or disclose information only within the boundaries of its legal requirements.”

Attorneys for the hospital did not respond to redbankgreen inquiries, including why the hospital wants to know who asks for copies.

At the council session, Cannon also said the funds collected would be paid into the municipal water utility account, rather than the general fund.

After the metering was corrected in late 2017, the Blaisdell building’s combined water and sewer billings were $105,769 in 2018 and $106,568 in 2019, according to borough records. [Correction: the original version of this post incorrectly attributed those billings to the hospital as a whole, rather than to the Blaisdell portion of the property.]