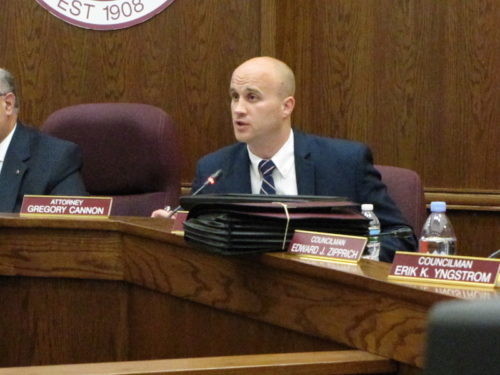 On a bipartisan vote at the annual municipal reorganization meeting, conducted via Zoom, the council replaced Sal Alfieri with Greg Cannon, who also serves as borough attorney in neighboring Red Bank. With the addition of Laline (pronounced ‘lah-leeny’) Neff to the council, the Democrats hold the governing body majority for the first time in memory.

A newcomer to local politics, Neff was elected in November with incumbent Chris Rodriguez. Both outpolled incumbent Susan Sorensen, a Republican who ran solo in pursuit of a fourth consecutive term.

Rodriguez was sworn to his second term, and Neff to her first, at a ceremony on Friday.

No reason was given for replacing Alfieri. “We don’t comment on appointments,” Rodriguez told redbankgreen when asked why the change was made.

According to borough Clerk Allyson Cinquegrana, Alfieri had been borough attorney for 15 or 16 years.

Alfieri, a founding partner of the Matawan-based firm, Cleary, Giacobbe, Alfieri & Jacobs, is not completely on the outs. He was retained as special attorney and as tax appeal attorney. In addition, one of his partners, Matthew Giacobbe, was designated labor attorney.

Cannon thanked the council for the appointment.

“I look forward to working with Sal. I know he’s not going very far, which is good – his office is actually right up the highway from mine,” he said. “And so that institutional memory will exist.”

Cannon is a principal in Sobel, Han & Cannon. A partner in the firm, Andrew Sobel, is a Fair Haven resident who serves on the borough planning board.

He also has strong party ties.

Cannon was appointed Red Bank’s borough attorney in January, 2017, when the first Republican majority in a generation collapsed after just a year and Democrats regained control.

In other business during the 18-minute-long reorganization, the council chose Rodriguez as its president, a ceremonial position.