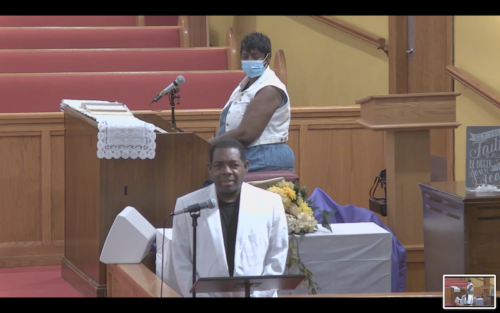 Councilman Michael Ballard speaking about race and policing issues at Pilgrim Baptist Church in June. Below, the council met for its reorganization via Zoom. (Photos via Zoom. Click to enlarge.)

The vote to deny Ballard a seat on the committee came shortly after he was sworn to a second term at a ceremony in Marine Park along with running mate and frequent ally, Councilman Ed Zipprich. They ran unopposed in the November election.

Ballard knew the axe was coming. In a statement he read at his swearing-in and repeated at the reorganization meeting, Ballard said he was “extremely disappointed” that his colleagues had denied him a seat on the committee.

He said he had voters had given him a second term on “record numbers of more than 3,900 votes.”

“This vote total demonstrates to me that my work on the council over the past three years is appreciated by residents across political, demographic and socioeconomic divides,” he said.

Yassin was chosen by his colleagues to head the committee, where he’ll be joined by Kate Triggiano and Erik Yngstrom. Yassin and Triggiano began the final year of their first terms.

Ballard voted no on the omnibus resolution that included the naming of committee members; Zipprich, who also lost a seat on finance, voted “present,” which Clerk Pam Borghi said would be recorded as an abstention.

None of those who voted in favor offered any comment on the change.

Yassin was also tagged as council president, succeeding Ballard. A ceremonial designation, the president leads council meetings when the mayor is absent.

• Mayor Pasquale Menna sought to quash what he termed “deliberate” misinformation: that the Senior Center on Shrewsbury Avenue is being readied for sale.

“Let me just make one thing clear: there is no present or anticipated plan to sell the senior center,” he said.
He said the 30-year-old building had sustained “a cataclysmic structural problem” when its fire-suppression system burst during a freeze three years ago.
He said it’s a problem “that will require remediation,” and numerous conversations had been held among borough officials “about how to best accomplish that.
“That’s all part of normal government function,” he said. But “there was never any discernible plan right now or in the anticipated future that I can see for that building to be sold,” he said.

• Bobby Holiday was sworn as chief of the all-volunteer fire department for 2021, succeeding Scott Calabrese.

Holiday, a borough public works supervisor, has been in the top post before.

His number one and number two deputies for the year are Nick Ferraro and TD Doremus, respectively. Doremus, a borough policeman, is also former chief.

• Theodore Braitowitz was named to the one-year position of mayor’s representative on the RiverCenter board. Ben Forest and Cassie Murphy were selected as citizen representatives.

The agency is in the midst of amending its bylaws, and a first draft of those changes were shot down by Menna last month as weakening council oversight.

• A proposed resolution addressing meeting protocol was tabled. Menna said it “needs to be worked up a little bit more and amplified.” He did not offer further explanation.