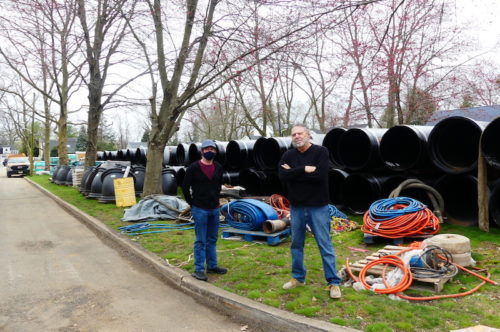 The temporary takeover of a block-long island of grass and trees that spans the Red Bank-Little Silver border has neighbors furious.

Red Bank officials said they had no advance notice of the New Jersey American Water Company project, and only learned last week, months into the project, that it had camped out on borough property. 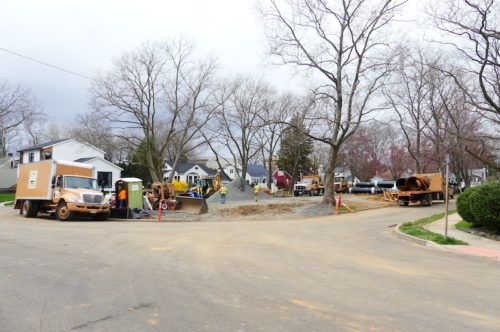 A view of the island from Rumson Place, and looking east along the path of the water line, below. (Photos by John T. Ward. Click to enlarge.)

The $7.4 million project calls for replacing a 36-inch diameter iron main with ductile piping along the half-mile length of Rumson Place, from West Lake Road to Branch Avenue.

The existing main burst in July, 2016, disrupting water service across much of the Greater Red Bank Green. The three-day outage ended when contractors installed a splice on the broken pipe.

But that project was “nothing compared to this,” said Tina Calnan, whose property is bisected by the town border.

Since at least December, and possibly earlier, Calnan and neighbors say, a contractor for NJAW has been using the parklet between West and East Lake roads as a staging ground, filling it with stacks of pipe, piles of gravel and other materiel.

Trucks rumble starting early in the morning, and dust is a constant presence, they said. Michael Humphreys called it a “shambolic and awful” construction site.

About two-thirds of the park is in Little Silver, with the northern tip owned by Red Bank.

But Red Bank residents, already angry about noise, dirt and what they say is a dearth of information about the project, were surprised when they complained to borough officials, and realized the officials were unaware of the work.

Calnan said Red Bank public utilities Director Cliff Keen told her last week that he’d been unaware that  borough property had been taken over as a staging area.

Neither Keen nor borough Business Administrator Ziad Shehady responded to redbankgreen inquiries about the project last week. But they discussed it at Wednesday night’s monthly council workshop session.

“We kind of found out about it through residents,” borough Engineer Laura Neumann confirmed.

Shehady said the water company’s contractor, J. Fletcher Creamer & Sons, had been unaware that a piece of the ground was owned by Red Bank, and consulted only with Little Silver government.

“I chalk it up to an honest mistake on their part and Little Silver’s part, but it will be rectified,” he said. The contractor “is not snubbing us,” and is working with the borough on a plan to restore the greensward when the job is completed.

“I certainly understand everybody’s frustration and their concern with this,” he said. “But things happen. Depending on which map you’re looking at, they don’t necessarily show that Red Bank owns that smaller portion of that park.”

Mayor Pasquale Menna asked Shehady to arrange a conference call as early as Thursday if possible with representatives of Little Silver, the water company and its contractor.

Garfield Avenue resident Charlie Oliver told redbankgreen that he was particularly flummoxed that Red Bank residents were being inconvenienced and ignored for a project from which they’ll derive no benefit.

The borough has its own water utility and supply wells, though NJAW sells water to the utility six months of each year.

“It’s an occupation of the neighborhood,” Oliver said. “Why don’t they store this stuff in Little Silver? I don’t benefit from this project.”

Oliver and others are dubious the work will be finished, as stated by NJAW, by the end of April.

“All we see are tubes coming in, and none going out,” Oliver said.

And whenever it’s done, the neighbors want the green restored so they can again enjoy it as they have in the past: as a place to walk dogs, play football and toss a frisbee.

“My biggest concern is, is it going to be restored?” said John Shepherd. He and others want to be sure the company doesn’t simply drop grass seed atop the tons of new gravel and leave.

Our contractor works directly with the borough to obtain any permissions for construction yards on municipal land and is responsible for restorations based upon their agreement.

The main replacement along Rumson Place is expected to be completed by the end of April, however, final restorations may not take place until late summer or early fall.

The Red Bank streets in the area, once a farm, were taken over by the borough from a developer in 1928, at the same time water mains were installed, according to a report in the now-defunct Red Bank Register.