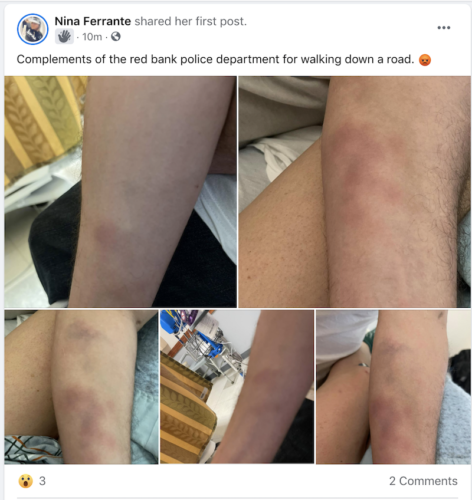 Red Bank’s police chief disputed a claim of excessive force posted on Facebook Sunday, telling redbankgreen that there was “no physical contact at all” when officers encountered a couple on New Jersey Transit property Saturday night.

A post on the Red Bank New Jersey page by Nina Ferrante showed five photographs of a bruised arm or arms with the caption, “Complements of the red bank police department for walking down a road.”

In subsequent posts, Ferrante wrote, “literally just walking on a gravel road next to the tracks and they grabbed us. (Literally)”; “They grabbed our arms and threw us against a pole for walking on a wrong road!!” and “Posting what pigs

do for no good reason. Thanks!”

In response to a question posed by another Facebook user, Ferrante wrote that “THEY SAID TURN AROUND WITH YOUR HANDS BEHIND YOUR BACK AND PUT THAT FORCE ON US OK!!!!!!???? ITS THE SAME ROAD MY BF HAS BEEN WALKING FOR 20 years and gave us 3 different excuses as why they stopped us and then ended giving us trespassing”

Ferrante also said she or her companion went to the emergency room for “a seizure,” not because of the bruises.

According to Chief Darren McConnell, Ferrante, 36 years old, and Thomas Armstrong, 39, both of Oceanport, were issued summonses for trespassing on New Jersey Transit property near the Red Bank station at 10:20 p.m. Saturday.

Here are McConnell’s responses to questions emailed to him by redbankgreen Monday morning:

She was not arrested. She and her companion were issued summonses for trespassing.  They were not taken into custody and there was no use of force whatsoever.  Ms Ferrante was transported to Riverview at her request for an unrelated issue.  She has not filed any sort of complaint with the PD.

This encounter was completely routine and unremarkable. Any suggestion that police used excessive force, or any force at all, is not accurate. It’s unfortunate that during these difficult times when there is so much tension and distrust of law enforcement across the country that anyone would imply that they were a victim of excessive force by police when in fact there was absolutely no physical contact at all.  Such fictitious allegations are a disservice not only to the police department but to the community as we strive to maintain good relationships and trust with those we serve.

Neither Ferrante nor Armstrong responded to redbankgreen requests via Facebook Messenger for interviews Monday morning. Their responses, if any, will be included here.