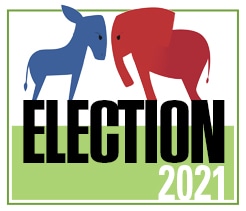 With nine weeks to go in a rare primary race for Red Bank council, a civil war within the Democratic party intensified this week. Councilmembers Kate Triggiano and Hazim Yassin at the Mayor’s Ball in 2018. (Photo by John T. Ward. Click to enlarge.)

• As reported by redbankgreen, Mayor Pasquale Menna and four council members called for a a charter study that, in the long run, could open up elections to more independent candidates.

In response, Zipprich noted that he’s not a candidate, and called the majority’s statement “an act of desperation on their part to personally attack me.”

He also refuted their claim that he had “tried to throw Triggiano and Yassin out of the local Red Bank Democratic Party,” calling it “another falsehood.”

“They had every opportunity to adhere to the process,” he said in a statement to redbankgreen. “No one tried to prevent them from participating in the democratic process.”

• Zipprich and his lone ally on the council, Michael Ballard, kept the Senior Center – the issue on which the party is most publicly split – in the spotlight.

During a workshop meeting Wednesday night, they pressed to have the center included on the Recreation and Open Space Inventory to prevent additional development of the site. And while none of the other four council members opposed the move, said they needed more information, sparking an extended argument.

“Here we go again,” Ballard said. “Kicking the ball down the road.”

Triggiano said she was “very discouraged by the implication that there’s a threat to that property.” She said Ballard and Zipprich were perpetuating “a false and very dangerous narrative” in order to stoke fear among vulnerable residents.

• Primary challengers Bruce Maida and Jacqueline Sturdivant accused the incumbents of a “tenure of failure,” and defended the local party process of candidate selection.

“We are not part of a mysterious plot to overturn local democracy,” they said in a statement to redbankgreen. “Unlike the incumbents, we followed all the rules and processes to run for office, filed all the appropriate paperwork, and won our nomination the same way they did in 2018, by an overwhelming majority of elected Red Bank Democratic Committee members.

“Claiming the system that worked when they won is being manipulated because they didn’t like the outcome is disingenuous,” the statement continued. “It shows they’d rather break all the rules than accept the fact that they are overwhelmingly ineffective candidates who have no support from the party they claim to represent.

“During their only term in office we’ve seen 11 senior Borough employees quit, taking their institutional knowledge with them,” the statement continued. “Long time employees of color have been fired. They’ve raised our taxes, bloated our budget, insulted community members and happily declared that their job is to ‘do what the department heads want.’”

“This latest salvo about non-partisan government is nothing more than the distraction of two flailing incumbents who know they’re in trouble.”

In a statement to redbankgreen, he said he commended “those Democrats who have finally stood up to Ed Zipprich.”

This Charter Study Commission is something which could have and should have been in process had Councilman Zipprich not sabatoged [sic]  it to maintain power. However, the Democrats unfortunately only decided to support it after it was politically convenient. While I believe, now, the Democrats stated intention to put forth a charter study commission is genuine, it should be noted that this is something our candidates and members have been pushing hard for the last three years. We would look forward to working with Democrats on the commission going forward.”

In response, Zipprich said: “I challenge him to find a time when I  commented on the charter study.”

Penney is one of his party’s two “placeholder” candidates to unseat Triggiano and Yassin.