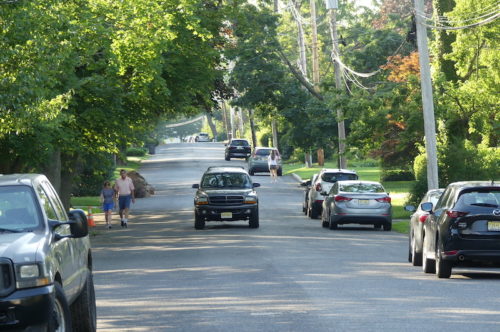 Residents of a Fair Haven neighborhood on the Navesink River told the borough council Monday night they don’t want sidewalks installed on their “bucolic” streets, even if a $350,000 grant has to be abandoned. 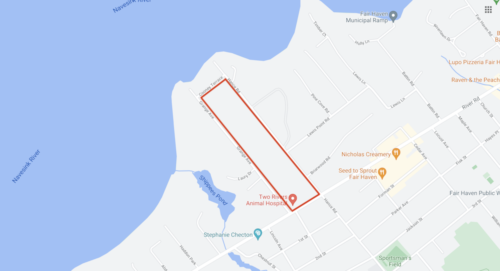 Neighbors say they want to preserve the character of a favored walking course they refer to as “the loop.” (Google Maps image. Click to enlarge.)

Turning out for the first in-person council meeting since the start of the COVID-19 pandemic, about a dozen residents of Hance Road, Grange Avenue and nearby streets sought to halt a plan that’s been inching ahead for four years without much notice.

At issue is a proposed sidewalk on the northern end of Hance Road, between River Road and the river. Town officials say one aim of the project is to increase pedestrian access to a riverfront pocket park at the street’s northern terminus, in an area that has little room for on-street parking.

The nameless park, and another just a block to the west, on Grange Avenue, are in line for rebuilding. Read more about those plans here.

The sidewalk project, part of a Hance Avenue roadway plan, has been advancing since 2017. Now, officials face a November deadline to award a construction contract for the town to be eligible for a $350,000 grant from the New Jersey Department of Transportation.

But residents of both Hance and Grange complained to the council that sidewalks would change the “rural” character of their tree-lined streets, where residents saunter, jog and bike.

Neighbors said employees on breaks from work at Riverview Medical Center in Red Bank can often be seen in their scrubs taking brisk walks around the one-mile, rectangular “loop” formed by River Road, Grange Avenue, Cooney Place and Hance Road.

Town officials, however, say they still have not fully committed to the sidewalk plan. They’re awaiting the completion of “base maps” based on land surveys to help determine which side of the narrow street might best accommodate a sidewalk, said Mayor Ben Lucarelli.

“Let us get the base maps, let us lay out the sidewalks as proposed,” he said. “But it’s not productive for us to discuss sidewalks that haven’t yet been laid out.”

DOT officials look at projects like Fair Haven’s “from 10,000 feet, and encourage the installation of sidewalks, particularly when they link to other sidewalks or projects they’ve previously funded for sidewalks,” Casagrande said at council session in April.

Area residents, though, said they don’t need base maps to decide what might be built, because they do not want sidewalks.

“It’s uniquely rural,” Hance Road resident Richard Saxe said of the area. “We’d like to keep it the way it is. I don’t think getting a grant is justification for spoiling a beautiful area.”

Moreover, Cole pointed to the Active Transportation Plan portion of the borough’s Master Plan, which she said is “silent” on adding sidewalks to the area, though it calls for them elsewhere.

Lucarelli said one aim of the Active Transportation Plan “is to get people down to our parks.”

But Anne Marie Coon, of Grange Avenue, disputed the sidewalks would do that. “We think your premise is flawed,” she said.

Alan Goldman said that in 27 years living in his home, which abuts the Grange Avenue park, he’d “never seen anybody having a problem going down the street.”

A sidewalk “might be better for the community, but it’s not for the people in the homeowners that don’t want it,” he said.

Lucarelli later said that if the residents don’t want the sidewalks, abandoning the state funding was an option.

The pocket park project, which also includes a floating dock at Battin Road, carries a price estimated at $806,000. The borough has secured a $250,000 grant from the Monmouth County Open Space program toward the cost of the Grange Avenue piece, with bond financing for the balance passed in 2018.