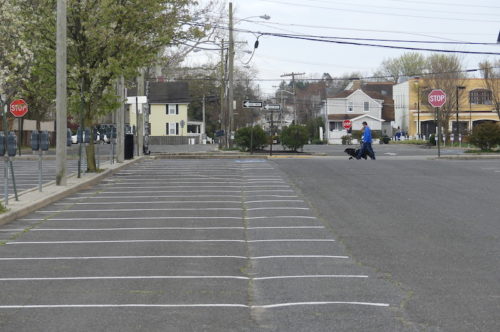 The East Side parking lots would get a makeover under an engineering contract on the agenda. (Photo by John T. Ward. Click to enlarge.)

The Red Bank council has some weighty spending and hiring matters on its agenda when it meets this week.

• Taxpayers will get their first look at the 2021 budget, which is up for introduction. The document is not available for publication until the council introduces it, according to Clerk Pam Borghi.

But an ordinance that’s required to increase the budget more than the 1-percent allowed under New Jersey cap law is also on the agenda, and would permit an increase by the full 3.5 percent allowed by law.

• Adoption of an ordinance clearing the way for a November referendum on the creation of a charter study panel to recommend possible changes to the borough’s form of government.

• Appointing Cherron Rountree, the township administrator in Holmdel, as executive director of the Red Bank Redevelopment Agency, at an annual stipend of $15,000.

Rountree would succeed Ziad Shehady, who served as both executive director and borough business administrator prior to his resignation in April.

• Renewal of a professional services contract with Millennium Strategies, a grant-writing business that has brought in more than $1 million in funding since it began woking with the borough in 2018.

• Authorizing CME Associates to draw  up engineering plans for an East Side parking lot makeover, at a cost not to exceed $70,500, and plans for a parking lot on the former site of red clay tennis courts in Marine Park, for another $20,000.

• Hiring DMR Architects to draw up plans for the restoration of the Senior Center on Shrewsbury Avenue.

More information about the program can be found here.

• Authorize a six-month contract with the Monmouth County SPCA for animal control services.

The move coincides with the elimination of the borough’s animal control officer position, held for years by Henry Perez.