A SKUNKLESS DAY ON THE ANIMAL CENSUS 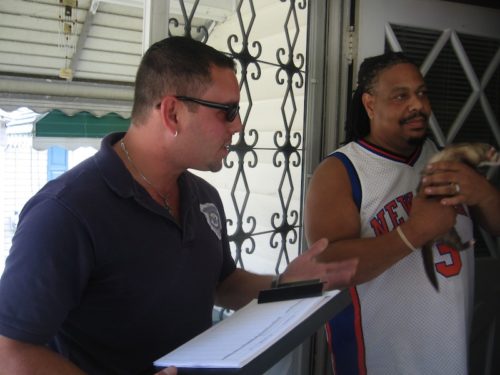 Henry Perez doesnt give up easily. After repeatedly knocking on an unassuming front door on Red Bank’s West Side, he takes an investigative look around and puts his ear to the door.

“I don’t hear barking,” he says, making a note on his clipboard, “but I dont like the look of that ‘Beware of Dog’ sign.”

Perez waits, playing a game of chicken with whoever or whatever lurks behind the old wooden door. He slyly peers through windows, around porches and up driveways looking for the telltale signs: a wagging tail, a misplaced chew toy, some forgotten droppings.

Nope. Meet Perez, the borough’s Animal Control Officer, midway through a town-wide pet census to license all cats and dogs from the Navesink to Newman Springs Road.

Today, Perez has invited redbankgreen along on the animal beat, and while there’s no answer at this house, he assures us he’ll be back.

Earlier, Perez started his day with two calls about loose dogs, followed by a quick morning patrol. Armed with extra poop-scoop bags and a whole lot of brochures, he shuttles his red and white utility van around area parks and open spaces  “hotspots”, he calls them, where dogs are known to run and soil freely  on his mission to keep the public healthy and pet-lovers happy.

“Patrolling allows me to prevent something from happening by educating,” he says. “I can also get to know pet-owners and where pets live in case I see them out running at-large.” Perez, 37 years old and a lifelong animal lover, spent two years with the SPCA after getting his animal control license in his native Middlesex County. In his present job, he serves Red Bank, Fair Haven, Little Silver, Shrewsbury Borough and Shrewsbury Township.

As he continues on the path of promoting animal and human harmony, Perez is ready for most any surprise that might come his way. Each call is different, he says, and days run the gamut from ducklings trapped in a river bed to multiple dogs at-large on the same street.

While no animals were on the lam in today’s neighborhood, Perez did meet his share of surprises. The first door he approached didn’t house any cats or dogs  just one ferret.

“Well, state law only requires that we take note of dogs and cats,” he says. “We’re trying to make sure that they all have their shots so that we can ensure public health.”

In fact, human health, not animal welfare, is the top priority of a licensed animal control officer, according to guidelines published by the New Jersey Department of Health and Senior Services. Perez’ state-mandated responsibilities also include addressing rabies, dog licensing, impounding of dangerous animals, animal cruelty reports, and investigation of threatening wildlife situations.

So while he sometimes takes heat from residents for enforcing the pooper-scoop law and wanting everything but their pet’s middle name, he knows it’s for the good of the community.

“Everything we do under the DHSS is for the residents’ health,” he says. “People can give me a hard time. Sometimes they get mad, like I’ve caught them at a bad time or something. But if you love the work, it’s no biggie.”

If angry humans are a headache, though, frightened animals are something else altogether. Last month, Perez had to rescue a skunk that fell into the basement of a house being remodeled on Leighton Avenue  with a somewhat predictable result. “Usually you can just throw a blanket over them, and if they don’t see you they won’t spray,” he says. “But this guy put up a fight. After about three attempts, he sprayed me.”

Perez managed to trap the skunk and release it a couple of miles away, but it left him and his van smelling beyond funky. “I’ve gotten used to the smell,” he says, “but I tried to stay away from other people for the rest of the day.”

If that wasn’t enough to make him run for a desk job, a few times his job more closely resembled that of a character on ‘Law and Order.’

“Once, on New Years Eve at SPCA, we got the call for the first murder of the year down in Asbury Park. We had to go to this house of the murdered man and take care of all of his exotic animals  tropical fish and turtles and things. Meanwhile, there were still human remains on the carpet,” he recalls.

Today, though, Perez has lucked out: no felonies, no human tissue, no air-befouling mammals. In fact, he encounters few animals, period. Most residents of West Side Avenue are renters, one resident explains, and so they aren’t allowed to have pets. But from behind the few doors that do post signs or emit barking sounds, Perez is greeted by residents who have no objections to the animal census.

“Sure, I’m happy to do it,” says George Lauterwasser, an East Westside Avenue resident and former borough fire chief. “Recently, my wife and dog were attacked by a pit bull not on a leash, and because the town had all the information we were able to get it taken care of. You have to know all this stuff, it’s good to have.”

As he hits the pavement on this sunny afternoon, Perez switches easily between English and Spanish, chatting up small Hispanic children playing in a driveway and making fast friends at a Mexican family barbecue. In between questions about “perros” and “gatos” (dogs and cats, people, come on), he manages to score some homemade stuffed tortillas and fresh salsa for himself and a certain reporter. This guy is more than just pets, ladies and gentlemen.

For now, the census is just about finished, but the work of animal control officer never is. On the same day redbankgreen followed Perez around town, one report of a raccoon and one of a St. Bernard running at large down Maple Avenue promised to keep him running.

It’s all in an ideal day’s work, he says.

“To help the public and animals at the same time is a dream come true,” says Perez. “I want to do this forever.”

Colleen Curry interned with redbankgreen during her summer break from Villanova University, where she’s now a senior English major.

Posted on August 28, 2008 at 8:27 am, filed under Animals, Government, Health, People, Pets. Bookmark the permalink. Follow any comments here with the RSS feed for this post. Trackbacks are closed, but you can post a comment. Email this story.
PREVIOUS: WHERE HAVE I SEEN THIS? NEXT: NAH, LET’S GO BACK TO THE OTHER SIGNS