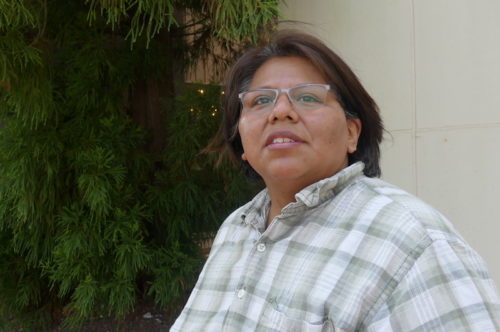 Sue Viscomi has mounted a candidacy as an independent, making it a three-way race for two council seats. (Photo by John T. Ward. Click to enlarge.)

Red Bank voters will have three candidates to choose from for two council seats in November.

For the second year in a row, none of them will be Republicans.

And for the second time in three years, Sue Viscomi is running as an independent.

In a refresh, dated Friday, of the names of candidates that will appear on the November 2 ballot, the Monmouth County Clerk cited “no nominations made” for Republicans.

As previously reported, local Republican Chairman Jonathan Maciel Penney and Christine Stout won the uncontested primary for their party’s nomination in June. But for the second year in a row, Penney and a running mate stood as “placeholder” candidates, he told redbankgreen in the weeks leading up to that vote.

In recent weeks, Penney declined to say if he and Stout would remain in the race, and more recently, neither has responded to inquiries about their ballot status.

So the election, with ballots going out in the mail September 18, will feature three women vying for two seats on the dais.

Going the independent route, Viscomi, of Cedar Street, gathered petition signatures and has begun posting lawn signs, but did not formally announce her candidacy until Sunday night, after being asked about it by redbankgreen.

She ran as an independent in 2018 in a five-way race won by Triggiano and Yassin. She finished last, with six percent of the vote.

A member of the borough board of education, where she chairs the finance committee, and the Red Bank Public Library board of trustees, Viscomi was born in Ecuador and living in an orphanage when she was adopted by an American family at age 11 months, she said.

A retired chief financial officer at an auto parts chain, Viscomi, 44, is a fixture at borough council and other government meetings, which she video-records and posts on social media.

This is a pivotal time for those in Red Bank and so many believe one party representing the town is NOT what is best for Red Bank. I am asking all voters, when you cast your ballot think about whom amongst us has served this town when we were not asking for a vote in return? Ask yourself, who has been bringing up issues, making suggestions, and questioning the budget every year since 2011? The same person that some years has a better attendance record than some council members. The same individual that has been recording meetings to be posted on Facebook and YouTube so as to promote transparency for all. Voters need to be informed, not just fed rhetoric.