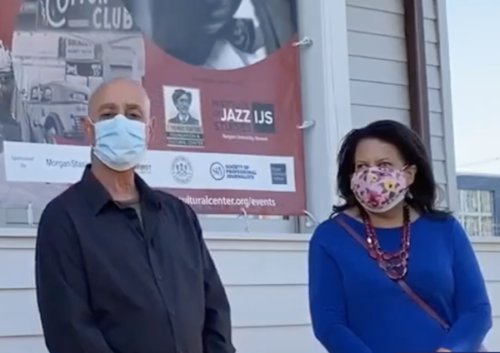 Bruce Maida and Jacqueline Sturdivant at a Senior Center rally in April. (Photo by John T. Ward. Click to enlarge.)

Incumbent Kate Triggiano solidified her position as the top vote-getter in the four-candidate race, according to updated results posted by the Monmouth County Clerk late in the afternoon.

Challenger Jacqueline Sturdivant pulled away from incumbent Hazim Yassin in the race for the second spot on the November general election ballot.

The results suggested that the race was over for Sturdivant’s running mate, Bruce Maida.

The results remain unofficial, with mail-in ballots eligible for counting for six days.

Trigggiano, Yassin and Maida did not immediately respond to redbankgreen requests for comment. Sturdivant, who had previously declined through Maida to provide contact information, could not be reached.

Triggiano and Yassin are seeking second three-year terms on the all-Democratic council. Maida and Sturdivant, both newcomers to electoral politics, won the endorsement of the local party establishment to force a rare primary race.

The Republicans have two “placeholder” candidates on the general election ballot, party Chairman Jonathan Maciel Penney and Christine Stout, who ran unopposed in the primary.