Hazim Yassin at his first meeting as a council member in January, 2019. (Photo by John T. Ward. Click to enlarge.)

UPDATE: September 9, 2021: See Yassin’s response to this article below.

Red Bank Councilman Hazim Yassin hasn’t paid the rent on his apartment in 18 months and owes more than $29,000, his landlord alleges in a lawsuit. 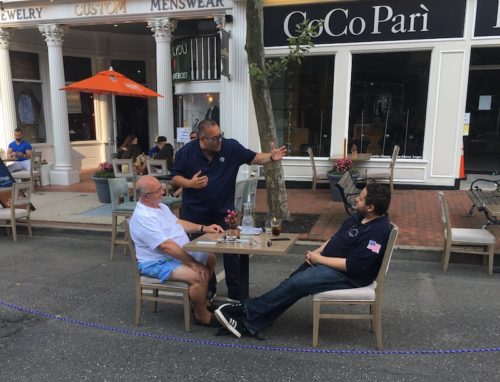 According to a lawsuit filed by the Molly Pitcher Apartments, Yassin hasn’t paid the $1,506 monthly rent on his Branch Avenue unit since January, 2020.

When the Monmouth County suit was filed, on March 4 of that year, Yassin owed $1,529, but a payment ledger filed by the landlord’s attorney last month put the latest total at $29,129.20.

Yassin, a lame duck whose bid for a second term was derailed in the June Democratic primary by political newcomer Jacqueline Sturdivant, did not respond to questions redbankgreen sent him via email Monday. The case docket does not list any filings by Yassin to answer the landlord’s claims.

The August 5 court filing by landlord’s attorney Adrienne LePore appears to mistakenly include a lease agreement and other materials associated with other tenants of the Molly Pitcher complex. But the payment ledger is identified as that of Yassin. LePore did not respond to redbankgreen emails.

After months of delays associated with the courthouse closure due to the COVID-19 pandemic, the parties were ordered to participate in mandatory settlement talks on August 6, the docket shows. According to the court website, the matter remained listed as “not settled” as of early Wednesday.

Yassin, who this year holds the ceremonial title of council president, leased the apartment, his first residence in the borough, in September, 2017, just 14 months before he was elected to the council.

As reported by redbankgreen, his Republican opponents questioned Yassin’s rapid ascent through the party ranks within months of moving to town.

In response, Yassin, then 29 years old, told redbankgreen he had he moved to from his parents’ home in Lincroft “because I was financially able to move out on my own, and I chose Red Bank because it’s one of the greatest towns in New Jersey.”

Yassin’s father, Mahmoud Yassin, is also named as a defendant in the lawsuit.

At the time, Yassin said he worked at a unit of Wealth Advisory Group in South Brunswick, selling insurance and “bringing in clients” for securities and other products that colleagues are licensed to sell.

According to the National Association of Insurance Commissioners website, Yassin’s license as a producer expired in August, 2020, and remains inactive.

UPDATE: redbankgreen received this statement from Yassin on the evening or September 9:

My landlord and I are in a dispute and it is working its way through the process of the courts. While this dispute started before COVID, the situation has been complicated by the pandemic on several levels, which resulted in the courts being closed and caused numerous delays. I am optimistic that my landlord and I will reach a settlement, but if not, the courts system will resolve it.
Frankly I don’t view this as anyone’s business but my own and my landlord. So when contacted by the media I did not immediately respond. I did not see the news worthiness of covering a rent dispute, as well as my lawyer advising me not to discuss the details of this case publicly.
Lastly RedBankGreen chose to mention that my insurance license has lapsed, which clearly was done with a negative connotation. My current job as a financial consultant – a promotion from my previous position – does not require the license, so it’s lapsing occurred in the normal course of events and is irrelevant to my employment.

Posted on September 8, 2021 at 7:00 am, filed under Featured, Government, Housing, Law & Justice, People, Real Estate, RED BANK and tagged hazim yassin, lawsuit, molly pitcher apartments, nj, red bank, rent. Bookmark the permalink. Follow any comments here with the RSS feed for this post. Trackbacks are closed, but you can post a comment. Email this story.
PREVIOUS: RED BANK: A PROFUSION OF PINK ON PEARL NEXT: SHREWSBURY: MAN CHARGED AS EMBEZZLER