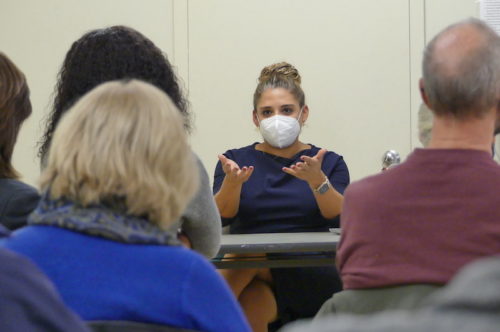 With the cancellation of its year-ending meeting scheduled for earlier this week, Red Bank’s Redevelopment Agency closes out 2021 having met just twice since July.

Going into 2020, whether it will survive to its third anniversary is an open question. Chairman David Huber said he would leave the agency this month. (Photo by John T. Ward. Click to enlarge)

Constituted in 2019 to map out plans for the future of both private and public real estate, the agency has faced persistent opposition from Councilman Michael Ballard, who has been joined in some of his criticisms by Councilman Ed Zipprich.

In particular, they objected to the agency spending time and money studying alternatives to simply repairing the long-shuttered Senior Center, alternatives that were eventually rejected by the agency itself. The issue fed a bitter divide on the six-member council, all Democrats.

Ballard has also long maintained that the broader work of the agency could be handled by the council itself.

Now, it appears Ballard will have another ally on the governing body: Jacqueline Sturdivant, who was elected in November to fill the seat being vacated by one-term council member Hazim Yassin.

Asked in a redbankgreen questionnaire what “specific new initiative” voters could expect from her if elected, Sturdivant responded that she would “vote to… disband the Redevelopment Agency.”

Sturdivant is scheduled to be sworn to office Saturday at noon, along with Councilwoman Kate Triggiano, returning for the start of her second three-year term.

Three hour later, the council will hold its annual reorganization session via Zoom, when Sturdivant’s pledge may get its first test. The terms of two agency members –  Alpha Reynolds-Lewis and Wilson Beebe, who leads the municipal facilities subcommittee – will have ended at midnight.

In addition, Chairman David Huber, whose term ends in 2025, has previously said he would step down from the agency this month.

Sturdivant did not respond to redbankgreen questions sent earlier this month that sought further insight into her plans.

Of the five returning council members, the only one who responded to questions about their views on the agency’s future was Councilwoman Kathy Horgan.

The Redevelopment Agency is literally in its infancy. To talk about disbanding it at this point is premature. Let’s give the agency a chance to fulfill its mandate. It’s important to remember that the agency is composed of resident representatives who are consummate professionals volunteering their time. The agency and its members are only beholden to the residents of the borough. Creating the agency was an apolitical solution to deal with redevelopment and rehabilitation. It was approved because it was in the best interests of the borough outside of the Council Chambers. In fact, it could be regarded as our first foray into non-partisan decision making.

Huber also did not respond to questions.

The agency was formed in 2019 to assess the borough government’s present facilities and future needs, and to work with any private developers who might propose large-scale projects. But none have yet come forward.

The municipal facilities subcommittee has had plenty on its plate. On its recommendation, the agency endorsed a proposal in May that the town overhaul and expand its “substandard” public works yard on Chestnut Street, a project a subcommittee estimated would cost $9.3 million. The idea has gone almost without mention by the council since then.

But no private sector proposals for redevelopment have been received, and at the agency’s meeting in July, Executive Director Cherron Rountree suggested “reaching out to the borough council to see what next steps they’d like us to do.

“I don’t think as an agency we can move forward unless we have feedback from the town council,” she said.

“Certainly we’ll tackle projects as they come up,” Huber said at the time, “but for now we don’t have any active projects that we’re really working on, besides the municipal facilities.”

At a presentation to a small audience at the borough public library earlier this month, agency Rountree said the agency “is really a tool for the town council, the planning board, the zoning board and all of the other agencies in the community… We’re just trying to help the municipality reach its goals. We can’t do anything without them.”

She also defended the use of a tax abatement program known as Payments in Lieu of Taxes as a valid means of spurring redevelopment.

She did not, however, address the agency’s future.

Video of Rountree’s presentation is available on the library’s Facebook page.