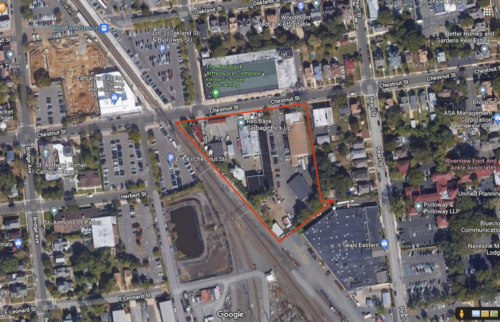 A Google Maps satellite view of the public works yard and adjoining property to the east, roughly outlined in red. (Click to enlarge)

Red Bank should move quickly to bond for an overhauled public works facility, according to a recommendation adopted by the Redevelopment Agency Tuesday evening.

Estimated cost, including the acquisition of property adjacent to the Chestnut Street site: $9.3 million. 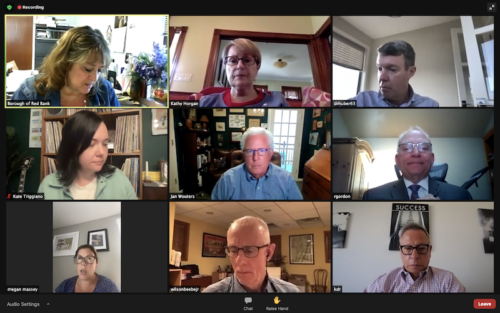 At its monthly meeting, conducted via Zoom, the agency heard and unanimously accepted an oral report from a recently formed municipal facilities subcommittee. The report concluded, said member Wilson Beebe, that DPW yard, on Chestnut Street, is “substandard.”

“There’s no question at all,” Beebe said, that the existing facilities pose “all kinds of security, safety and efficiency challenges that can’t be cured except by demolition and new construction.”

“We recommend proceeding expeditiously with the final planning, acquisition negotiations and bonding for an estimated cost of $9.3 million,” Beebe said.

“We would emphasize the urgency of this matter to the mayor and council, not only because of the condition of the current facilities, but in anticipation of the potential future availability of federal and state infrastructure monies,” he said.

Among the subcommittees’ findings in support of the proposal:

• The public works operation should remain where it is, on Chestnut Street opposite West Street, where it’s “co-located” with the water treatment plant alongside the New Jersey Transit rail line.

There would be “little fiscal benefit” and “no functional benefit at all” in separating the DPW from the water works, Beebe said.

• The council should “immediately proceed” in negotiating to acquire the adjoining property  “to help firm up the final cost estimate.”

The property was not specified, but the one-acre DPW lot shares a long border with a 1.5-acre site acquired in 2014 by Phoenix Productions for $1.8 million, records show.

• Referring to a non-public concept plan that suggested 9,000 square feet of administrative space for personnel, storage and utilities, the subcommittee found that amount of space “perhaps more generous” than required, though it may allow for flexible meeting, training and storage space for use by other departments.

• The cost estimates don’t take into account “the likely future predominance” of electric vehicles in the department’s fleet, Beebe noted. That would require recharging stations while reducing the need for fueling operations onsite.

Beebe said the subcommittee took into account the impact of a $9.3 million spending on the borough’s debt profile, as well as the estimated cost of repairing the Senior Center.

The agency last month recommended a $1.6 million proposal to rehabilitate the center, on Shrewsbury Avenue, which has been closed for two years following a leak. The council immediately adopted and began moving on the plan.

The two projects are “largely provided for by the rolloff of existing debt, save for a modest spike” in 2025, Beebe said, without offering details.

“We say all of this without any knowledge” of other capital spending needs the borough may have, he added.

A copy of the report was not immediately available, and it was not clear when it might become public.

Councilwomen Kate Triggiano and Kathy Horgan, who both serve on the agency, endorsed the recommendation.

“We know the importance of this project, the urgency, the current state of that facility,” Triggiano said, adding that the committee’s work was “exactly how an agency should function.”

“We’ve known for a long time that the DPW “needs to be in a more permanent, stable and safe place,” referring to the trailer offices that were “temporarily” placed on site decades ago. “We need to start working on this immediately.”

Afterward, Mayor Pasquale Menna called the report a “comprehensive analysis” that merits close review. [Correction: the original version of this story said Menna did not attend the meeting. He was present but was not shown on screen and did not speak.]

“The important message is that after successive councils have declined to review transformative proposals, there is a roadmap to addressing the Borough’s DPW needs and creating a safe and state of the art facility for our hard working employees,” he told redbankgreen. “That roadmap and analysis will be vetted in deliberate analysis and time.”

Before adjourning its public session, the agency went into closed-door executive session to discuss its search for a new, part-time executive director. It’s the second time since April that it has done so, and no candidates have yet been announced.

The job was previously held by Ziad Shehady, who resigned from the agency in February and as borough business administrator earlier this month.

Afterward, Huber confirmed to redbankgreen that he and his wife had sold their home on West Front Street and moved to a condo in Long Branch. Earlier this year, he had announced his intention of serving on the agency through the end of the year, but would not continue beyond that.

“I intend to honor my commitment to serve for the balance of the year,” he told redbankgreen via email.