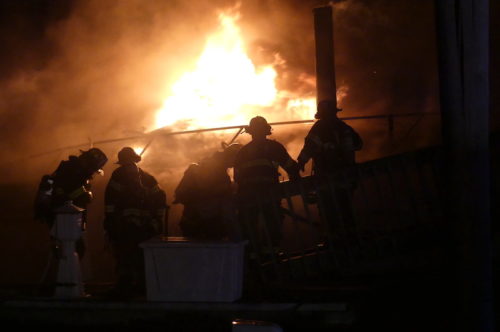 Volunteer firefighters battled the blaze in close quarters on a dock and ramp. Below, onlookers at Riverview Medical Center. (Photos by John T. Ward. Click to enlarge.)

No one was injured in the dramatic waterfront blaze that destroyed and sank a yacht docked at a Navesink River marina Thursday night, Red Bank Fire Chief Nick Ferraro told redbankgreen.

The 6 p.m. blaze at Irwin Marine, located alongside Marine Park, was initially reported as involving two vessels based on the proximity of another boat, Ferraro said.

No one was aboard the vessel, which was shrink-wrapped for the winter. An individual aboard a nearby boat escaped without incident, he said.

Volunteer firefighters contended with “tight” working conditions at the far end of  the dock, along with freezing temperatures and wind-driven flames and smoke, Ferraro said.

The cold is believed to have frozen a Wharf Avenue hydrant, but that did not impede the firefighting effort as a second hydrant was accessed without difficulty, he said.

Winds carried the smoke directly against the northern exposure of Riverview Medical Center, located on a bluff above the marina.

A hospital spokesman did not immediately respond to a redbankgreen request for information about the impact, if any, on the facility’s operations.

The yacht began sinking before the fire was out at about 8 p.m., Ferraro said.

The cause is under investigation.

The marina blaze was the second in three months in the borough. Fire also destroyed a vessel docked at the Molly Pitcher Inn on October 30.