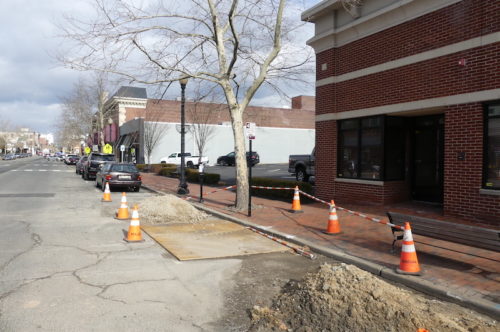 Denholtz Properties is adding the parking lot at 133 Broad Street to its portfolio, which already includes the office building at 137-139 Broad, at right. (Photo by John T. Ward. Click to enlarge.)

A privately owned downtown Red Bank parking lot that all but screams for development is about to get a new owner, redbankgreen has learned: the borough’s busiest builder. 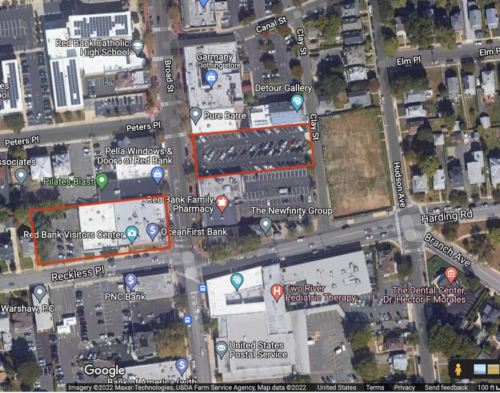 Denholtz is buying the parking lot, outlined in red at center above, and the office building at 140-148 Broad Street, in red at left. Below, Steve Denholtz, left, with Mayor Pasquale Menna at the Southbank groundbreaking in October. (Google map, above; photo by John T. Ward. Click to enlarge.)

Continuing a buying spree that began in 2016, Denholtz Properties is in the process of acquiring the lot, at 133 Broad Street, along with an office building across the street, company CEO Steve Denholtz told redbankgreen this week.

The firm is under contract to buy both from Schiff Real Property of West Long Branch, he said, with a transfer of title expected in the spring. Terms of the deal have not been disclosed.

The office building, at 140-148 Broad Street, at the corner of Reckless Place, was the subject of a Historic Preservation Commission approval of a proposed Denholtz exterior makeover earlier this week.

The purchases would position Denholtz as the dominant property owner at the Harding Road/Reckless Place junction that serves as the informal southern border of the downtown.

So, what’s the plan?

“We don’t have plans there yet,” Denholtz said. “We’re going to take this one bite at a time,” advancing the office project before turning attention to the lot, he said.

But he’s open to the possibility of housing on the parking lot site, which he said “is a 100-percent natural for that,” Denholtz said.

“My big thing about Red Bank is it doesn’t have enough downtown residents,” he said. “So we would love to see somebody come in with some multifamily projects.”

Meantime, “we’re going to add some vibrancy to that corner,” he said.

The lot serves the office building, which also has its own parking lot of about 25 spaces, and leases some spaces to Red Bank Catholic High School.

“We definitely won’t do it there. I don’t think it’s appropriate,” he said. “It’s just not a site that qualifies, so we have no intention of doing that.”

Regarding the office building, Denholtz expects to clear out tenants for interior renovations, and may relocate his company’s headquarters there.

Tenants include Red Bank RiverCenter, an Arthur Murray Dance Center and an OceanFirst Bank branch slated to close today. A state parole office that was a longterm tenant has already vacated the space.

RiverCenter executive director Glenn Carter told redbankgreen the downtown promotion agency plans to look for alternative space as it nears the end of its lease later this year. Denholtz said he would work with other tenants to make their moves “seamless.”

The prospect of the parking lot being developed scares Ken Schwartz, the 70-year-old art collector who transformed a former warehouse adjoining the lot into Detour Gallery in 2016.

The building, which also serves as his home, experience “crazy scary” shaking during digging for the new sewer line on Broad Street recently, and might not withstand the vibrations from closer construction, let alone the disturbance of an underground garage, if one is built, Schwartz told redbankgreen by email.

“I know Steve Denholtz and he is a good man,” Schwartz said via email, but “Detour Gallery is not the kind of  structure that if damaged can be reproduced or simply repaired. It is nearly 100 years old, held up by gorgeous roof trusses fabricated long ago of old railroad ties.”

Schwartz also expressed concern that development would block public views of the murals and “Men on a Beam” sculpture that adorn the gallery building, which fronts on Clay Street.

Denholtz, founded by Steve Denholtz’s late father in 1954, has industrial and commercial holdings along the east coast of the United States.

In 2016, the firm relocated its headquarters from Matawan to 116 Chestnut Street, where it’s now building the mixed-use Rail project, which calls for 57 apartments, 6,000 square feet of retail space and an interior parking garage alongside the train station.

The company is also building a 10-unit luxury condo project called Southbank, which will overlook the Navesink River from Boat Club Court.

Denholtz is also adding to its holdings at the downtown’s north end, where a panoramic “Broad-to-the-river” development has been envisioned for more than a century. See redbankgreen‘s story here.