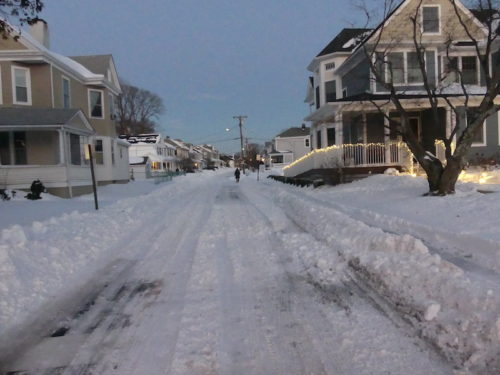 With a hard pack of ice and snow remaining on local streets after a weekend blizzard, some schools on the Greater Red Bank Green announced delayed openings Monday.

The weather to start the week won’t do much to hasten the cleanup, with freezing  temperatures lingering. 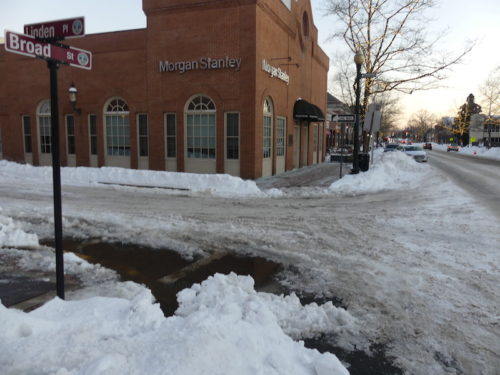 An ice-ringed puddle at the corner of Broad Street and Linden Place Sunday evening.  (Photo by John T. Ward. Click to enlarge.)

Red Bank Catholic announced it would be on virtual instruction for the day.

Fair Haven’s Knollwood and Sickles schools will open at 10 and 10:20 a.m., respectively.

Sunday evening, main arteries in Red Bank appeared largely clear, but many residential streets were covered or partly covered by an inch or more of hard-packed snow and ice, redbankgreen saw on a walk around town.

According to the National Weather Service, the region was socked with about 15 inches of snow that fell from late Friday into Saturday afternoon.

Monday began with 11-degree Fahrenheit conditions shortly before dawn, and an increasingly cloudy day forecast,  with temperatures peaking at a still-freezing 31 degrees.

Here’s the extended outlook from the NWS: