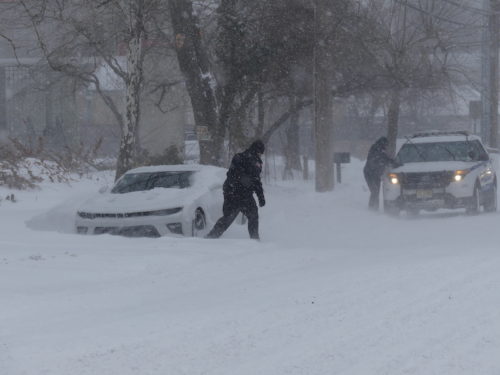 Red Bank plow operators had an easier time than in the past making their way down borough streets during the weekend snowstorm, police Chief Darren McConnell tells redbankgreen.

Fewer illegally parked cars also resulted in a dramatic drop in the number of violation notices being issued. 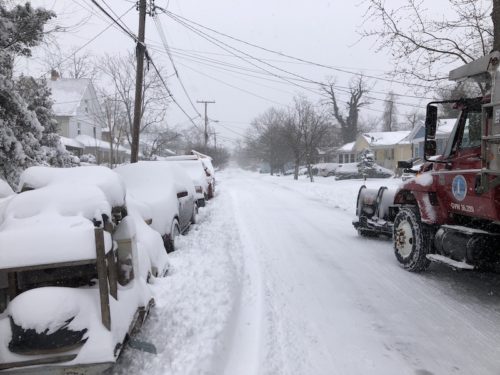 Above, four vehicles, including a tow truck, remained curbside as a plow passed on Bank Street Saturday; all were ticketed, according to McConnell. Below, a similar situation on South Street, below. (redbankgreen photos. Click to enlarge.) 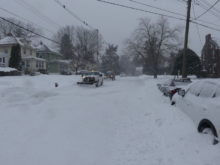 Police issued only 33 tickets for violations of a borough ordinance requiring all vehicles be removed from streets during a snowstorm and until streets are plowed, said McConnell, who doubles as acting borough business administrator.

“Compliance was considerably better than we have seen in other storms,” he said.

As previously reported by redbankgreen, in successive storms in early 2021, police issued 254 and 123 such tickets. And twice in 2018, police issued 260, setting records that have not since been approached.

Council president and police commissioner Kate Triggiano told redbankgreen that the borough “did everything humanly possible” in advance of the latest storm to let residents know about the need to move vehicles into driveways and public lots.

Those efforts include multiple messages via the borough website and text-email-phone message system, as well as police using loudspeakers on patrol cars to announce the policy in English and Spanish as they traveled streets, she said.