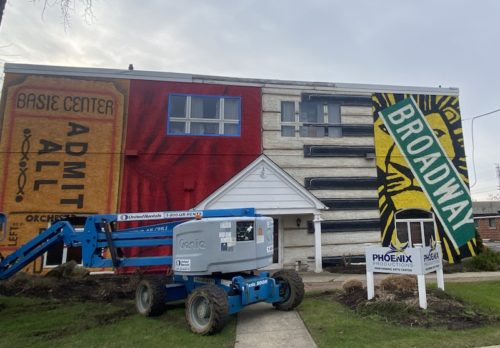 Phoenix Productions’ home at 56 Chestnut Street was painted over with a two-story mural last month. (Photo by Allan Bass. Click to enlarge.)

Press release from the Count Basie Center for the Arts

The Count Basie Center for the Arts and Red Bank-based Phoenix Productions intend to merge, allowing the community theatre company to officially become part of the organization which has hosted its productions for more than 30 years, the two nonprofits announced Tuesday. 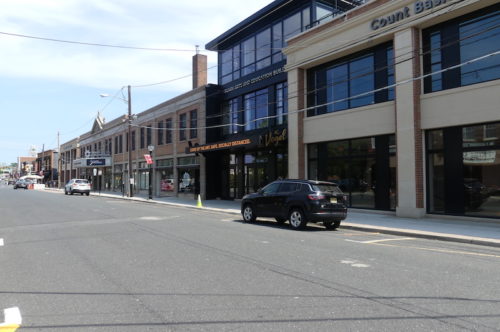 The Count Basie Center for the Arts on Monmouth Street, as seen last May. (Photo by John T. Ward. Click to enlarge.)

“Coming out of the pandemic, we were looking at how each of our nonprofit organizations could best serve the community,” said Adam Philipson, President/CEO, Count Basie Center for the Arts. “And we concluded by recognizing that we’re stronger together. This is a union three decades in the making, and we’re excited to work with Phoenix Artistic Producing Director James Grausam and continue Phoenix’s ongoing tradition of producing top-notch, quality community theater.”

The Count Basie Center, one of New Jersey’s leading presenting organizations, will work with Phoenix to produce six performances in the next 12 months. The titles of those programs will be revealed Friday, February 11, during opening night of Phoenix’s “The Wedding Singer” at the Basie Center’s Hackensack Meridian Health Theatre.

In addition to “The Wedding Singer,” Phoenix has two previously announced runs at the Basie Center: “The Wizard Of Oz” in the venue’s historic theater April 29-May 1, and “Putting It Together,” a tribute revue to composer Stephen Sondheim at The Vogel March 11 and 12.

In addition, Phoenix’s educational offerings will be folded into the Count Basie Center Academy of the Arts curriculum beginning with the summer 2022 session.

For Goins, whose daughter has performed in 13 past Phoenix shows and recently landed her first professional gig in NBC’s “Annie Live!,” the merger makes sense given the organizations’ focus on the future.

“The Count Basie Center for the Arts and Phoenix Productions share many of the same values,” said Goins. “A focus on diversity, equity and inclusion, serving the community with quality entertainment and educational offerings – this is a powerful combination of bringing two like-minded organizations together to create sustainable arts for future generations to come.”

For Wajda, a musical theater and Broadway vet who joined Phoenix 13 years ago and serves as its Music Supervisor, the merger represents a pivotal moment for the region’s arts scene. “Our organizations were able to weather the storm of the pandemic and exhibit creativity and resilience,” said Wajda. “We’re two organizations that remained vigilant, safe and committed to our missions, and today, we’re together and stronger for it.”

“From our initial conversations with Phoenix, there was clearly a level of shared core competencies to make sense of a potential merger,” said Basie Center Board of Trustees Chair Jeremy Grunin. “With this union, the Basie Center becomes both a presenting and producing organization, thus strengthening our mission to preserve and celebrate the arts.”

The addition of Phoenix Productions complements the Basie Center’s long tenure of supporting the Broadway community, from its “Broadway At The Basie Center” series of national touring companies, to the annual Basie Awards, which honors excellence in Monmouth County high school theatre.