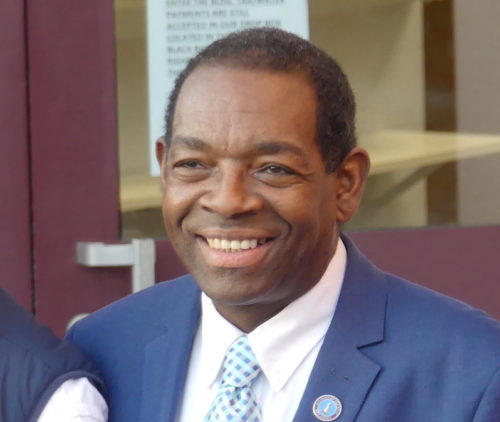 Red Bank Councilman Michael Ballard Tuesday blasted as “fictitious” an allegation that he slipped a raise for his wife, a part-time borough employee, past the rest of the governing body in 2019.

In the same press release, Ballard announced his intention to run for mayor, setting up a back-room clash with fellow Democrat and four-term incumbent Pasquale Menna. 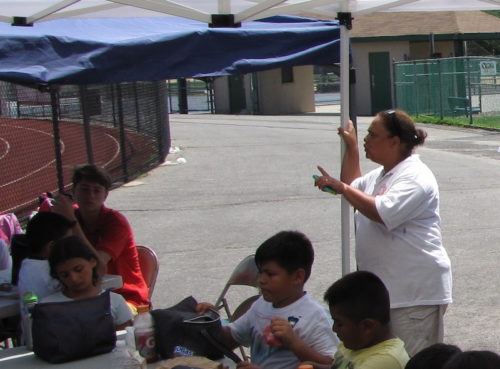 Rose Sestito at work as a summer camp supervisor in 2016. Below, Ziprrich, Ballard and Shehady at borough hall in 2018. (Photo by John T. Ward. Click to enlarge.) Ballard’s one-sentence declaration that he had submitted a letter of intent to the local Democratic party chairman to run for mayor was included in a statement he sent to redbankgreen refuting a newly surfaced memo from 10 months ago.

In an April 13, 2021, email to Councilwoman Kathy Horgan, then-Business Administrator Ziad Shehady attached a purported chronology of efforts two years earlier by Ballard to surreptitiously obtain a $2.20-per-hour raise for his wife, Rose Sestito, who works as a summer camp supervisor.

In the recap, Shehady wrote that, in developing a resolution setting hourly pay for summer parks and rec employees, Ballard, who chaired the finance committee, “indicated he wanted his wife to get an increase because he felt she wasn’t being paid enough and asked that I work up a version of that budget wherein all summer staff be given increases so it wouldn’t look like she was singled out.”

For at least two prior years, Sestito had been paid $17 an hour for the work.

A small budget was developed to back into a figure and apply that same increase across the board (approx 13%) [see email, dated 5/22/19, 1:48 pm]. Councilman Ballard and I spoke and he indicated that such a jump for so many counselors was too much of an increase overall and that they should be dropped back down to a 2% increase for the counselors and 3% for the supervisors [see email, dated 5/22/19, 2:04 pm] (screenshots of budget document tracking also attached)  Then, within the nearly 30 minutes prior to the Council meeting, Councilman Ballard came to my office and intimated that he had discussed this change with his wife and the 3% wasn’t enough for her, that she works very hard and this is her last year so he asked that the revised version that would be distributed to the Council be revised to reflect the $19.20 rate.  He wasn’t going to vote on it because he had to abstain since his wife was named but it wouldn’t catch anyone’s attention since a new version had to be provided to include the Assistant Supervisor.  I revised the Resolution, printed it as an amendment and disseminated to the Council, and then it was approved.  That evening, I revised the budget document.

Borough records indicate that Ballard abstained on the May 22 vote as the council approved a $19.20 hourly rate for Sestito, though the meeting agenda linked to a version of the resolution showing her rate at $17 per hour. Meeting minutes offer no indication that the council was informed of the underlying change.

It has come to my attention that former Borough Administrator Ziad Shehady has embarked on a salacious defamatory attack on me with a false accusation that I ask that THREE YEARS AGO, I requested that my wife get a raise as supervisor for the Borough’s Parks and Recreation summer staff.

I want to categorically, unequivocally and without hesitation deny Mr. Shehady’s claims.  Full disclosure, my wife Rose has been a supervisor for the Borough’s Summer Camp since 2010 or 2011 and was also supervisor during the summer of 2019.  I have ALWAYS abstained on every vote before the Council on the hiring and salary recommendations put forth by the Parks and Recreation Director and Business Administrator.

This outrageous, inflammatory, and disparaging claim being thrown at me, again THREE YEARS after the alleged occurrence, unfortunately, is part and parcel of why Mr. Shehady could no longer serve effectively as the Borough’s Administrator, resigning in disgrace right around the time this mysterious, unsubstantiated email exchange with Councilwoman Horgan.  Mr. Shehady is well known for ruining not only Borough assets and services, but the reputations of anyone, including residents, employees, and Council members alike, who dare cross him or challenges his authority.  This fictitious conversation between me and Mr. Shehady is just another in a long line of sad and pathetic attempts to smear those who do not agree with him.

I will fight this slanderous accusation vigorously and with all my might.  As an Elected official I cannot sue for these outrageous and slanderous lies, but my wife can and will if necessary.  It is simply unconscionable that Mr. Shehady would lower himself to attacking my family to push a personal vendetta against me.

The 2021 Shehady memo was posted last week on OPRAmachine, an online platform that expedites Open Public Records Act requests to local governments in New Jersey. The request had been filed with the borough clerk by an individual identified only as “Red Bank Watchdog.”

Ballard did not respond to a redbankgreen request for information connecting Red Bank Watchdog to Shehady.

Supporting documents referred to in the Shehady memo were not immediately available.

Late Tuesday, immediately after testifying via Zoom to the Charter Study Commission, Shehady, who now works in the private sector, told redbankgreen by email that he was not Red Bank Watchdog.

I have no idea what Ballard is accusing me of and frankly, I don’t care to know …I have no vendetta against him and have no interest in him, I suggest he move on.  He also should be mindful of his own defamatory remarks about me – his email contains a lot of slander and libel, I’m not a public official and he is a former employer. He would be wise to retract his comments about me to the press.

Shehady had announced his resignation from the borough five days before the email to Horgan, which was copied to borough Clerk Pam Borghi.

Horgan did not respond Tuesday to a redbankgreen email seeking clarity on what she had requested from Shehady, and why.

UPDATE: Horgan sent the following to redbankgreen following publication of this story Wednesday:

Someone at borough hall — and I emphasize here that it was not Ziad — had mentioned to me that Councilman Ballard had interceded, as Chair of the Finance Committee, on behalf of his wife to increase her salary as a summer camp supervisor in Red Bank’s Parks and Recreation Department by 13%.
I contacted Ziad and asked him about it because I felt this was hearsay and wanted to know if this accusation was true.  Hence, the exchange of emails.

Ballard’s plan to run for mayor, meanwhile, puts him on the field against Menna, who told redbankgreen late Tuesday that he had filed a letter with the Democrats announcing his intention to seek a fifth four-year term.

As mayor, Menna votes only in the event of a council tie, and in recent years has often been at odds with the Zipprich-Ballard faction, which now has a 4-2 majority with the recent additions of Jacqueline Sturdivant (by election) and Angela Mirandi (by appointment to fill a vacancy). In the minority are Horgan and Councilwoman Kate Triggiano.

Though he’s been away from government since last May, Shehady continues to loom over borough hall. Last week, by a 3-2 majority, the council voted to reset the authority of the business administrator to pre-Shehady levels, after complaints by Ballard and Zipprich that the office had too much power.

In addition, the council appears on track to hire, for the second time, a lawyer to examine a 2020 leak of Shehady emails that alleged Zipprich was interfering in and attempting to “sabotage” a trash-collection contract. Zipprich has denied the characterization.