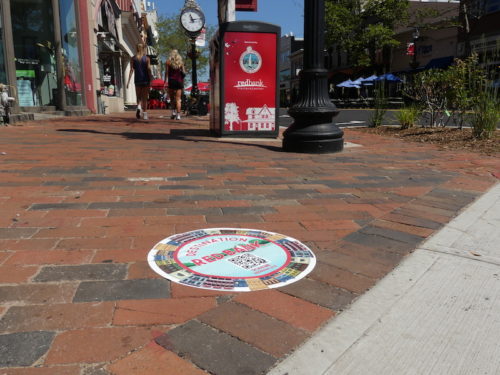 Red Bank’s Environmental Commission began a rollout this week of sidewalk markers downtown aimed at enhancing walkability in the central business district and beyond. 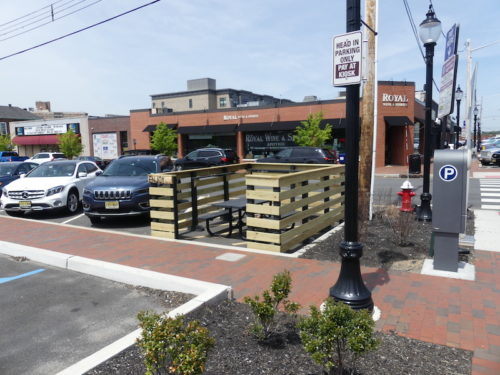 The AARP grant also paid for materials to build a parklet in the White Street parking lot. (Photo by John T. Ward. Click to enlarge.) 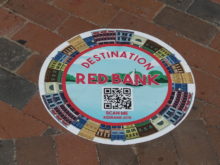 Dubbed Destination Red Bank, the campaign includes a new website and dozens of temporary sidewalk decals that link to it via QR code.

At the website, users will find four suggested walking tours with callouts to some of the town’s “most beloved landmarks and rich community history,” it says.

The site contains maps, within which brief details about places of interest are offered.

The aim of the campaign is to encourage “socially distanced” walking as well as awareness of historic places and figures, said EC Chairwoman Nancy Facey-Blackwood.

• One mile (the Downtown” loop)

• Five kilometers, or the “Red Bank Classic,” matching the the course of the annual race of the same name

• Five miles, or the “East Side Johnny” loop, which, name aside, covers both the east and west sides of town.

Commission member Dave Johnson tells redbankgreen he plans to “discuss renaming options” for the five-mile route to better align with the names of the other loops.

The commission effort, which also included the creation of a picnic table parklet in the White Street parking lot, was funded by a $5,000 AARP Community Challenge Grant.

The $3.2 million given out nationally was targeted at 244 “quick-action projects… helping urban, rural and suburban communities make immediate improvements and jumpstart long-term progress to support residents of all ages,” according to the AARP website.

The service is the latest to merge history and strolling in Red Bank. In 2021, a history app developed by high school students debuted; it was recently bolstered with additional tours. And the Red Bank Public Library offers guided tours of historic sites around town in the autumn and spring.

The Environmental Commission meets at 7 p.m. on the first Tuesday of the month at borough hall, 90 Monmouth Street.