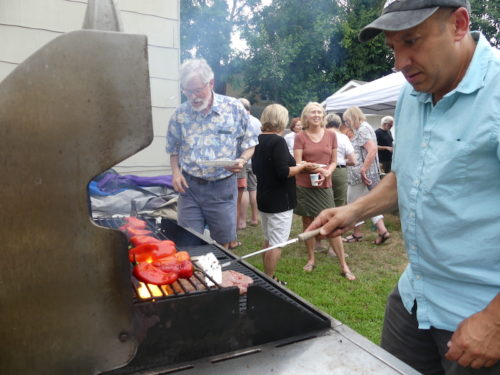 The outcome of the public question on the ballot in Red Bank’s November election – whether to change the forms of both government and elections – appears an easy call.

Voters last year overwhelmingly approved the creation of a Charter Study Commission, which in turn unanimously moved the referendum to the ballot in July. And so far, no organized opposition has emerged.

Still, looking over their shoulders, referendum advocates held a Labor Day campaign launch event with the aim of drumming up support at the polls. 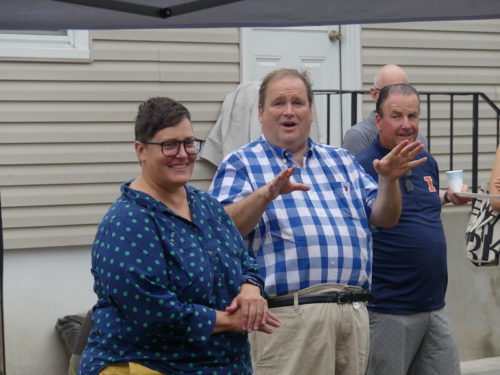 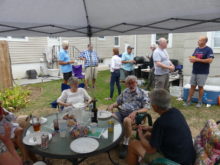 “I think we’re in good shape,” commissioner Ben Forest told redbankgreen. “I think we’re going to win, but I’m not taking it for granted. I’m operating under the assumption that there will be an organized ‘no’ campaign.”

“We’re here to educate you so you can help your neighbors understand why ‘yes’ is important now,” commissioner Kate Okeson told the 40 or so attendees at the event, held at Forest’s Locust Avenue home.

Featuring grilled meats, ziti and Dutch stamppot, the open event was paid for by Red Bank Forward, a pro-referendum campaign, said Forest. The group is accepting donations to pay for marketing materials, and a door-to-door push for votes is planned, he said.

Passage of the referendum would trigger a nonpartisan election in May, 2023, for all seats on a new, seven-member “council-manager” form of municipal government, with a directly elected mayor.

The government would be officially reconstituted July 1, ending the weak-mayor, strong council management structure in place since the borough’s creation in 1908.

Shall the COUNCIL-MANAGER PLAN of the Optional Municipal Charter Law, providing for SEVEN (7) council members to be ELECTED AT LARGE for STAGGERED terms at NON-PARTISAN elections to be held in MAY, with the MAYOR ELECTED DIRECTLY BY THE VOTERS, with run-off elections to be held thereafter if a sufficient number of candidates fail to attain a majority of votes, be adopted by the Borough of Red Bank?

Meantime, in what could be the town’s last-ever partisan election, voters will choose a new mayor and two council members November 8 to serve from January 1 through June 30.

Portman, who was flipping burgers at the event, made support for the referendum one of his foremost issues in the June primary, and told redbankgreen “there’s a lot of overlap” in the two electoral efforts.

But Monday’s event was solely about the referendum, he said, noting that he’ll kick off his own campaign Wednesday night at Red Rock Tap + Grill.

He is, apparently, the sole candidate for mayor, with the local Republican party having put Brian Irwin as a “placeholder” on the ballot.

Party Chairman Jonathan Maciel Penney did not respond to a redbankgreen request for an update sent over the holiday weekend.

Two council seats are also up for grabs: those now held by Horgan and Angela Mirandi. With Horgan out of the race, Mirandi and fellow Democrat John Jackson are on the ballot opposite Maciel Penney, making his fourth attempt in four years for a council seat, joined for the second year in a row by Christine Stout.