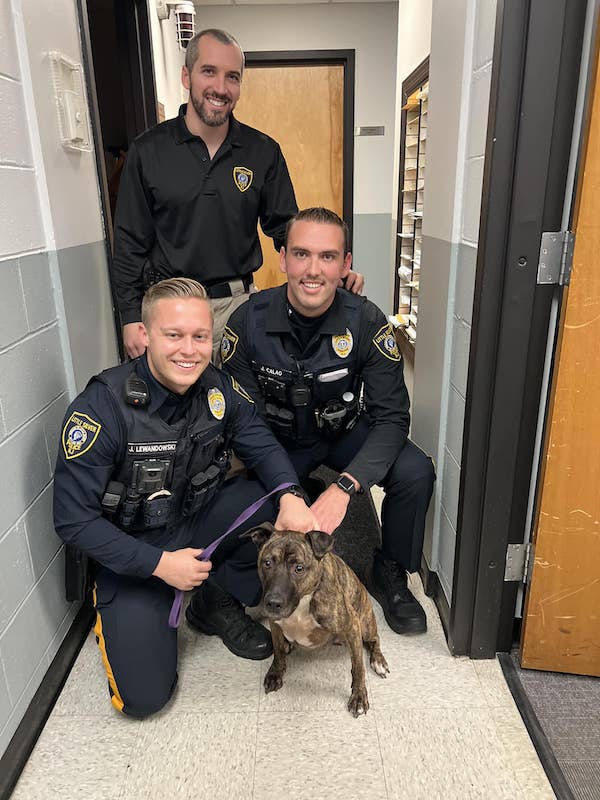 A Little Silver dog taken by presumed good Samaritans was reunited with her owners on Thanksgiving after 10 days and a tip from a concerned citizen, police said Tuesday. 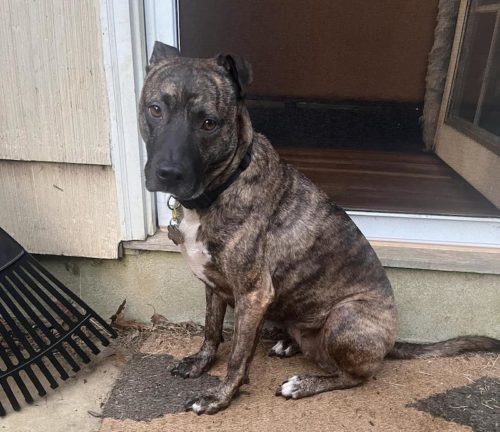 Gemma “has barely left my side,” since her return, her owner says. (Photo courtesy of Cheryl DeLorenzo. Click to enlarge.)

The dog, a six-year-old pit bull mix, got out of the White Road backyard of owner Cheryl DeLorenzo on November 14.

After two motorists stopped to corral the animal, one of them drove off with her, promising to try to reunite her with her owner, the other one later told DeLorenzo.

But no such effort was made,. Even though Gemma wore Little Silver tags and a Shrewsbury Animal Hospital rabies tag. She also had a microchip under her skin that would have identified her to any veterinarian or animal control office, DeLorenzo heard nothing.

DeLorenzo, who had adopted her “shelter special” pet as an 11-month-old, was “beside” herself with worry, and anxiously spreading word about the incident on social media, she told redbankgreen a week later.

All she knew was that Gemma had gotten into a white, mid-sized car with a man, a woman and a blonde teenaged girl inside, according to the other motorist who had stopped.

Borough police, who had been unable to immediately track down the culprits,  announced on Facebook November 21 that they were “not looking to file any charges” against those who had the dog, but wanted only “to reunite her with her family for the holidays.”

Then, last Wednesday, a concerned citizen contacted the LSPD “with a tip about
Gemma and her possible location,” Chief Paul Halpin said in a statement Tuesday.

“Detective Stephen Scherer immediately followed up with this information,
which led to Gemma being returned, unharmed, to the Police Station on Thanksgiving,” he said.

After 10 days of anxiety, DeLorenzo said, “all of a sudden there were flashing lights and a knock at the door” on Thanksgiving evening, as police brought Gemma home.

DeLorenzo was “shocked and full of awe,” told redbankgreen via text.

“I have no idea where she was or who had her,” she said. “The police said the people told a story that did not make sense. It’s crazy to me that we were put through so much stress for 10 days, and it was so unnecessary.”

Gemma, who was still wearing her collar and ID tags on her return, “is getting back to normal” and “has been sleeping almost nonstop,” DeLorenzo said. When awake, “she has barely left my side,” she said.

DeLorenzo said she is “so thankful to everyone that shared our story” on social media, as well as to “the police for taking this seriously, the SPCA for posting and caring, my neighbors, my community and all the surrounding towns. People contacted me from all over. I think knowing that she was picked up and then never brought anywhere really struck a chord with people.”

Then there was the other, true good Samaritan, who had spotted DeLorenzo while she was looking for Gemma.

“If I had never met my eyewitness, who told me Gemma had been picked up, I feel like our story would have not had such a happy ending,” DeLorenzo said.