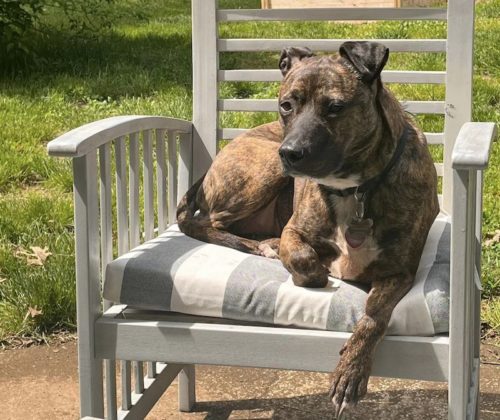 Gemma is a six-year-old pit bull mix with a brindle coat. (Photo courtesy of Cheryl DeLorenzo. Click to enlarge.)

A Little Silver dog that wandered away from home a week ago appears to have been snatched by presumed good Samaritans, her owner says. 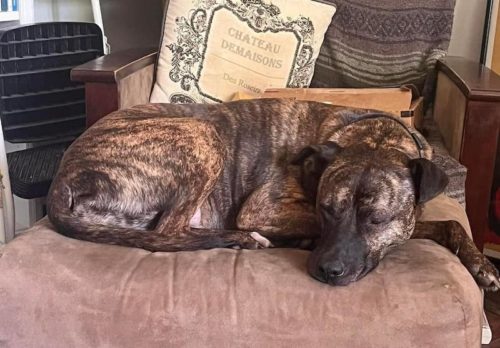 Cheryl DeLorenzo, of  White Road, said Gemma, her six-year-old “shelter special” pit bull mix, got out of her backyard last Monday evening, apparently through a gate that had accidentally been left open.

While she was anxiously looking for Gemma, DeLorenzo said, a woman pulled her car over on White Road to ask if she was looking for a dog. She went on to say she had seen the loose dog crossing the street and stopped at the intersection of Silverwhite Road to check on it.

While the woman was looking at Gemma’s tags, a second car pulled up, and a woman got out to offer help. The woman and others in the car appeared to be “gentle, caring dog people,” and Gemma did not hesitate to get into their car when they offered to take her.

Believing they would make an effort to find Gemma’s owners, the woman watched them drive off with the animal, DeLorenzo told redbankgreen Sunday.

“They made like they were going to drop her off somewhere” so she could be reunited with her owner, DeLorenzo said the woman told her of the second car’s occupants.

“She said, ‘your dog is fine. Just call the Little Silver police or the Shrewsbury Animal Hospital, and I’m sure you’ll get her back.”

But as of Sunday, “my dog has never been returned,” DeLorenzo said.

The dog was taken away in a white, mid-sized car with a man, a woman and a blonde teenaged girl inside, DeLorenzo said the woman told her. Police have checked home security cameras but found no video of the dog being taken, she said.

In the interim, the first motorist saw a social media post about the missing dog and contacted DeLorenzo. “She said, ‘oh my god, you didn’t get your dog back? How is that even possible?’ She was totally shocked.”

“I’m beside myself,” said DeLorenzo, who adopted Gemma at 11 months. “I don’t know if they took her with the best of intentions, but then decided, ‘oh, this dog is so sweet, we’ll keep her.’ I just want her back.”

UPDATE: Little Silver police posted the following on Facebook Monday morning: “After speaking with the victim and the Monmouth County Prosecutors Office, we are not looking to file any charges against anyone who may have Gemma. We only wish to reunite her with her family for the holidays. Anyone who has information on the whereabouts of the dog please call the Little Silver Police 732-747-5900 or the Monmouth County SPCA 732-542-0040. You can also bring Gemma here or any local animal hospital and remain anonymous.”