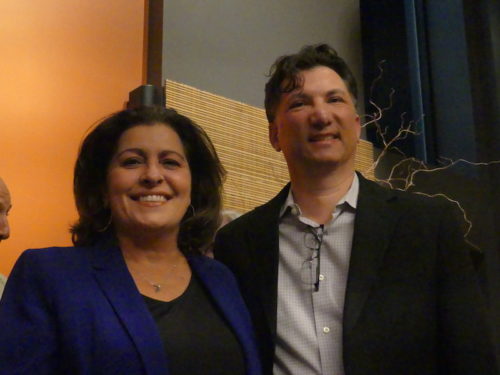 As it appeared on election night, Red Bank voters elected Democrat Angela Mirandi and running mate John Jackson to the borough council last earlier this month, according to completed tallies.

Tallies for the council race, above, and referendum, below, as posted on the Monmouth County Clerk’s website Monday. (Click to enlarge.)

Of the four, only Jackson responded to a redbankgreen request for comment Monday:

“I’m excited to do what I’ve longed to do in Red Bank—serve our community in a leadership capacity. I also appreciate that voters based their choice on what they saw and heard of us, through our own words and actions. Angela and I will lead in the same manner in which we campaigned—with thoughtfulness and integrity.”
He said he and Mirandi had not yet heard from Taylor and Penney.

Mirandi was appointed to fill a vacancy in February; Jackson will succeed Councilwoman Kathy Horgan, who did not seek a sixth three-year term.

More than 68 percent of voters answered “yes” to the public question on changing the form of government in place since 1908 with a “council-manager” form.

Because the referendum called for an all-new governing body to be seated July 1, 2023, Portman, Mirandi and Jackson, as well as the incumbent council members, will have to run for election again in May if they hope to keep their positions.

In the interim, all seven governing body seats will be occupied by Democrats for the sixth straight year beginning January 1.

Here are the tallies as the counting progressed:

If you value the news coverage provided by redbankgreen, please become a financial supporter for as little as $1 per month. Click here to set your own level of monthly or annual contribution.
Posted on November 22, 2022 at 7:47 am, filed under Featured, Government, Law & Justice, Politics, RED BANK and tagged 2022, angela mirandi, billy portman, council, election, form of government, john jackson, Jonathan Maciel Penney, mark taylor, nj, Politics, red bank, referendum, republicans. Bookmark the permalink. Follow any comments here with the RSS feed for this post. Trackbacks are closed, but you can post a comment. Email this story.
PREVIOUS: LITTLE SILVER: ‘GOOD SAMARITANS’ KEEP DOG NEXT: RED BANK: ‘AIRBNB’ LAW TABLED