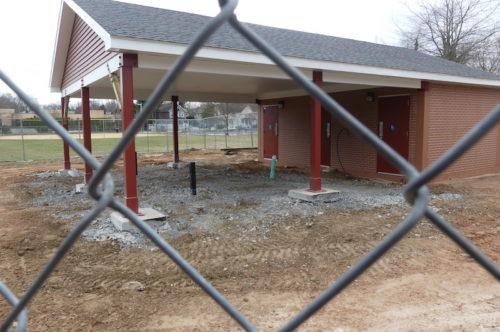 There’s been yet another setback for the new restrooms at Eastside Park in Red Bank.

What now? Read on. 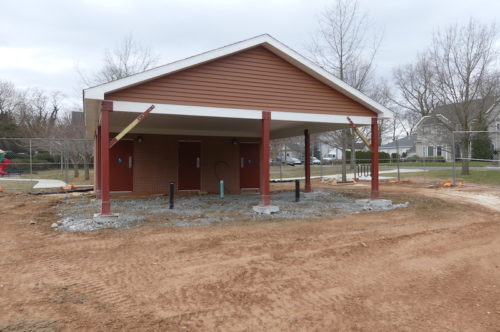 After almost three years of talk by borough officials about creating lavatories and a shaded area for picnic tables in the Harrison Avenue park, prep work for the project began a year ago, and was slated to be completed by July 1. But the contractor on the project, G&R Masonry, ran into issues that delayed the work.

Then a credit problem for G&R forced the borough to purchase the prefab building directly, rather than under the contract, which further pushed back the completion date. A crane rental also added some $9,000 to the cost of the project, which was part of was part of a $427,325 contract covering improvements at Eastside Park and Mohawk Pond.

The building was finally installed last month – while officials addressed an oil spill from an unrelated accident involving two trucks that delivered the structure.

With only utility connections and landscaping work left to be done, the project was about to wrap up, officials said in late February.

But now, the patio on the yet-to-open building has been jackhammered out.

“The contractor is making adjustments based on field conditions for drainage to ensure we don’t have any issues with it flowing away from the patio, restrooms or sidewalks,” Business Administrator Ziad Shehady told redbankgreen via email.