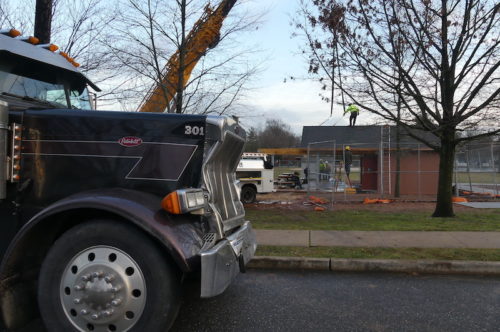 A two-truck accident Tuesday afternoon left an oily mess alongside Eastside Park in Red Bank, where new restrooms are being installed. 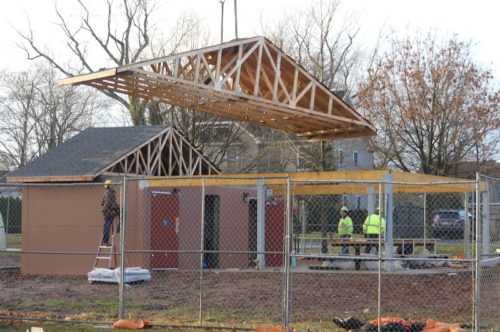 According to unconfirmed reports, a tractor-trailer delivering prefab roof sections to the park rear-ended another one at the intersection of Harrison Avenue and Harding Road in Little Silver sometime in the afternoon.

The trucks were said to have been driven by a father-and-son pair, neither of whom was injured. Their identities were not immediately known.

The Monmouth County public works department laid sand on the road in the vicinity of the accident.

After its trailer was transferred to another tractor, the damaged tractor, seen above, proceeded to the job site, leaking motor oil for a half-mile along Harrison, said borough Emergency Operations Manager Tommy Welsh.

As of 5 p.m., borough officials were arranging with the site contractor to prevent the remaining oil from entering the storm sewers, Welsh said.

Meanwhile, assembly of the prefab restrooms continued, with completion of the roof and work to tie in the utilities expected Wednesday, said public works director Cliff Keen.