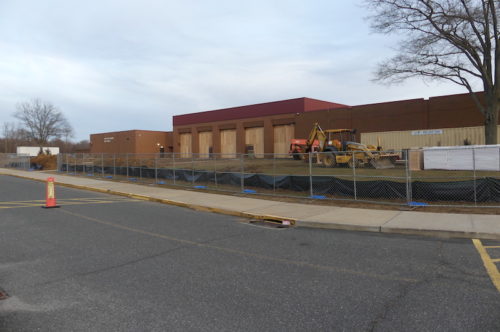 No reopening date has been set for the RBR campus in Little Silver, where some windows are boarded up for a construction project. (Photo by John T. Ward. Click to enlarge.)

Starting Thursday, classes will be conducted online, Moore wrote in a posting on the RBR website late in the afternoon. Students will be asked to check in at specific times for assignments.

The move follows the announcement by Governor Phil Murphy a short while earlier of eight new presumed-positive cases in New Jersey, including two in Monmouth County, with patients ranging in age from 17 to 66. That brings the state’s total of presumptive positives cases to 23 cases, plus one death.

Further details were not offered, however.

Since Moore’s announcement Monday of a one-day shutdown for a “deep cleaning of the building,” and a subsequent decision to continue the outage by a day, Moore has linked the closures “to the identified case of COVID 19 in Little Silver.”

One of RBR’s students is a sibling of the 27-year-old borough man reported to be presumptively infected with the virus and recovering at home. But it was not clear if the 17-year-old referred to by Murphy is the RBR student. Moore and local officials did not immediately respond to redbankgreen inquiries.

On Tuesday, Moore also announced the cancellation of all extracurricular activities, practices and scrimmages on Friday or Saturday, as well as SAT testing scheduled for Saturday. The cancellations remain in effect.

Moore’s posting Wednesday said the school’s custodial staff “has thoroughly re-cleaned and disinfected the entire building.  We have also been in regular contact with the Monmouth County Regional Health Commission, and a meeting with local and school officials has been scheduled for this afternoon.”

The school, he said, has “created an emergency virtual instructional plan,” which includes a list of public libraries and other facilities where students who don’t have Internet access at home can get it – except those exhibiting flu-like symptoms, who “are not allowed access to these buildings.”

The virtual instruction days “are counted by the NJ Department of Education as official school days,” Moore wrote.

“While the virtual school platform is not intended to replace the traditional classroom environment, teachers will still be able to deliver standards-based instruction to students in an online environment until the normal school schedule can resume,” the virtual learning plan states.