Almost two months later than promised, Red Bank residents will get a detailed explanation next week of a borough budget that would increase property taxes by 2.8 percent. 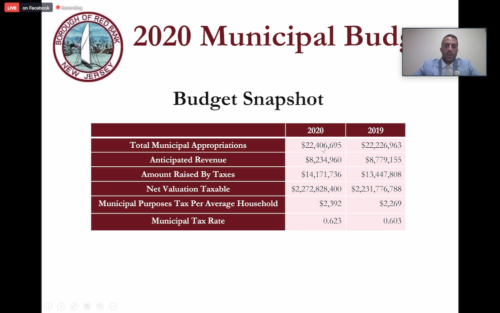 Screengrabs from a presentation by Shehady during the July 22 meeting. (Click to enlarge.)

The borough finance committee has scheduled an online budget presentation and Q&A for 6 p.m. Tuesday, August 4, according to an announcement posted to the town website Thursday morning.

The walk-thru is expected to include explanatory material Business Administrator Ziad Shehady rolled out July 22  – to the surprise of Councilman Michael Ballard, who chairs the finance committee.

The absence of a separate public meeting devoted solely to the ins and outs of the spending plan, a custom under former committee chairs Michael DuPont and Linda Schwabenbauer, became a point of contention during that session.

Previously, at the council’s June 17 meeting, Mayor Pasquale Menna said the committee would hold focus meeting “as early as next week to get the input from the public  – we’ve always done that.”

But as of July 15, no such session had been scheduled.

In response to an inquiry that day by redbankgreen asking whether one would be held, Ballard replied, via email:

“I have not held a separate public budget meeting outside of the regular Council meetings since I became Finance Chair. At this time no such meeting is scheduled.”

A week later, during a contentious session, an adoption vote on the $22.4 million spending plan was postponed until August 19.

Prior to offering to “fall on [his] sword” over the lapse, however Ballard shifted focus to what he said was Shehady’s failure to deliver a budget package that he had requested.

Later on, though, Shehady paged through a slideshow, or a portion of it, that he had prepared to explain the spending plan, to Ballard’s surprise.

“This is the first I’m seeing it,” Ballard said.

The owner of a residential property assessed at the 2019 town average of $366,231 would pay about $130 more this year, Shehady said at the time.

Ballard, who had previously said he could not vote for the plan without changes, said the budget calls for “inflicting even more of a financial burden on Red Bank residents during an economy-wrecking pandemic.”

The council is scheduled to hold a workshop session August 5, though no formal action can be taken then.