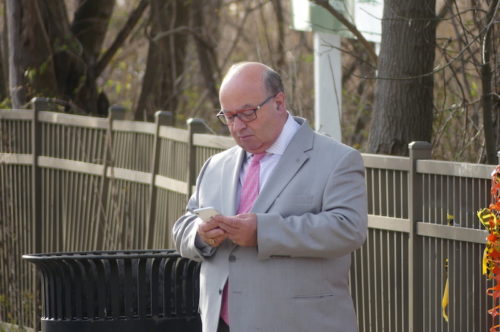 Red Bank Mayor Pasquale Menna says he will recuse himself from future discussions of food trucks following questions raised by redbankgreen about work he did for the owner of a proposed site of a mobile eatery.

Menna, a private practice lawyer, did not disclose his connections to the property owner during Wednesday night’s council workshop meeting, when he revived the dormant issue of food trucks. But he said the omission was unintentional. 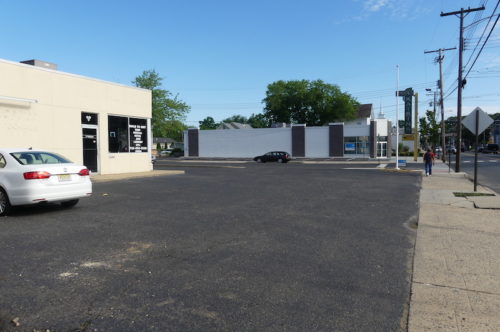 Menna has handled legal matters involving both 204 Shrewsbury Avenue, in foreground, and 192 Shrewsbury, seen in the background. (Photo by John T. Ward. Click to enlarge)

The creation of an apparent conflict of interest “is why I will recuse myself if it goes any further,” he said Thursday.

During the borough council’s workshop meeting, held online, Menna initiated a discussion of food trucks, saying he’d received “a number of inquiries” about whether the borough was willing to revisit a longtime ban on them “in light of COVID.”

Menna did not say who had inquired. Nor did he overtly advocate that the council change the ordinance that bars food trucks, or grant a specific exception to the ban, which is the only way a truck can be allowed to operate in town.

But just five minutes after Menna raised the issue, callers weighing in during the public comment portion of the meeting pressed the council for action on a particular truck and site in what appeared to be a coordinated effort.

As reported by redbankgreen, Debra Greiner and Nicole Barbarino Montecalvo, the mother-and-daughter owners of a food truck called Your Sister’s Balls, asked the council to allow them to use 204 Shrewsbury Avenue as a place to do business.

They were immediately followed by the vacant site’s owner, borough resident Steve Goodman, who said he had invited the pair to set up there, provided the council gives an OK.

Menna, it turns out, has repeatedly provided legal services to Goodman over at least the past five years. But he told redbankgreen Thursday that he did not know in advance Goodman was planning to comment, and that he had never heard of Greiner and Montecalvo.

Still, in addressing questions raised by redbankgreen, he acknowledged a potential appearance of conflict of interest.

“As soon as Goodman came on, I should have recused myself,” he said. “I did not do so, not through any forethought, but I just rolled into it.”

According to New Jersey Department of Treasury records, in 2015, Goodman formed a company called JADSRB LLC, with Menna listed as the registered agent.

Menna acknowledged he also acted as attorney for JADSRB in its purchase that year of 204 Shrewsbury Avenue for $525,000. Goodman still owns the property through JADSRB.

In addition, Menna said he represented the LLC in brief litigation with the seller, longtime auto shop owner Vinnie Green.

During the meeting, Menna did not mention his connections to Goodman, either in introducing the topic or after Goodman spoke.

Menna has also represented Goodman and a company called 192 Paca Hosing LLC, which bought the former Katsin’s Drugs building from Goodman himself for $1 in a transaction identified as a “deed correction” in March of this year.

Goodman is listed on the deed as president of 192 Paca Hosing, which was formed in 2018. The certificate of formation of that business names Menna as an authorized representative.

Food trucks are banned from borough streets, and can operate only on private property with approval by the mayor and council, according to Business Administrator Ziad Shehady. Shehady told redbankgreen that no formal application has been filed requesting council action.

The council took no action on food trucks Wednesday, when Menna suggested members “recirculate some information on it among ourselves and then see if we want to revisit the issue.”

But if the issue comes up again, Menna said he will not participate in the discussion, even if it does not concern Goodman.

“I am recusing myself from any consideration of that [the request by Your Sister’s Balls] or food trucks at all,” Menna told redbankgreen.

Shehady did not respond to an inquiry sent Thursday night asking if Menna had disclosed his relationship with Goodman to him or the council prior to, or after, Wednesday’s discussion.

Assuming the facts you describe, I don’t see any issues arising under the Rules of Professional Conduct governing lawyers. The RPCs generally cover ethical obligations arising out of actions undertaken in a professional capacity as a lawyer, rather than as a public official. Whether there would be an analogous requirement upon a public official under these circumstances to disclose a relationship is an issue of government ethics law that I am not an expert in, so I won’t express an opinion.

redbankgreen also reached out to a government ethics expert recommended by the New Jersey State Bar Association, but did not receive a response by Thursday evening.

Goodman obtained approval from the borough planning office last August to allow a cannabidiol-based retail business in the former Katsin’s drugstore, which has been vacant for 16 years, but the store has not opened.

[UPDATE: Following publication of this article, redbankgreen received an email response to an inquiry sent Thursday to Goodman. He said he had previously contacted Menna “for his opinion” after he and the truck owners found themselves “getting nowhere” with the borough in their attempt to establish the truck site, and Menna replied that “he would bring up the issue at the meeting. The meat Ball girls and I decided that we would dial in on the zoom meeting. During the meeting the girls and I were texting back and forth… [but] At no time did Mr. Menna know that we would speak nor what we would speak about.”

Goodman also said the prospective tenant obtained the approvals for 192 Shrewsbury, not himself.]