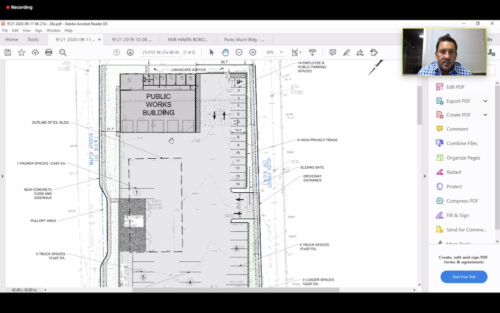 One is a proposed new police station, which was the driving factor behind two controversial, and failed, property acquisition efforts in recent years.

The other is a public works yard makeover that not long ago appeared on track to yield residential lots the town could sell to fund later projects. That may no longer be the case. 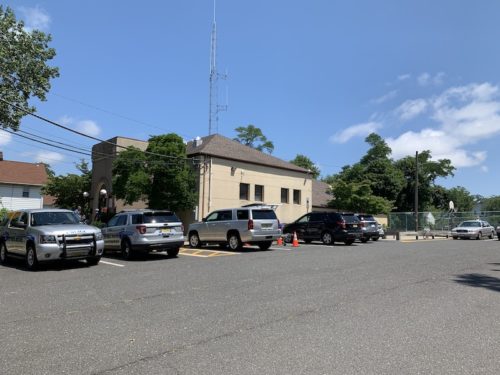 A replacement for the police station, above, would be built immediately to the west of the existing structure under a proposal. Below, a satellite view of the site. (Click to enlarge.)

Citing a lack of public support, the council in July abandoned the proposed $3.4 million purchase of an office building next door to the firehouse on River Road. Once cleared of tenants, the site was to become home to borough hall and the police department, under the proposal.

That followed an unsuccessful effort to buy another River Road property, the site of a Sunoco station, for the same purpose.

A linchpin of both deals, as envisioned by Mayor Ben Lucarelli and other officials, was the public works yard on Allen Street, where the main building, he said recently, is “fully depleted, fully depreciated and in need of replacement.” They proposed consolidating DPW operations at the north end the 2.3-acre site, in a building to be erected on Third Street.

That would free up land at the south end for as many as 10 residential building lots that could be sold to help defray costs, Lucarelli said starting in late 2018.

The plan went before the public in a presentation that drew several hundred residents to Knollwood School in January, 2019. But it failed to advance, as attention shifted to the land deals that eventually fizzled.

Now, Lucarelli said Monday night, officials have “stepped away from” the idea of selling off the southern portion for residential development in order to focus on “how to deliver a new facility at the best possible cost.”

Officials now appear to agree they’d prefer to shift the DPW facility to the south. Councilwoman Betsy Koch endorsed the idea, she said last month, because locating the facility on Third Street “kind of downgrades the neighborhood.”

Councilman Chris Rodriguez said he also supports the southern option, in part because it leaves the northern end, along Third Street, available for potential housing, though it would yield perhaps only three lots.

In recent weeks, Lucarelli and others have spoken about the town’s needs with obvious urgency. At a special council session convened August 25 solely to discuss facilities, Lucarelli said this is the fifth council to take up the question of what to do about the police station, a former schoolhouse that is outdated and infested with black mold.

“Governments being what they are and with elections coming up, I felt it necessary to have a special meeting so we could discuss our options and move forward with some decisions before we have yet another governing body come January 1,” he said.

“We’re trying to get to a binary decision here, where, as past history has shown, we seem to reboot and start the process over,” Lucarelli said.

“We’ve been elected to make informed and sometimes rather tough decisions,” said Council President Susan Sorensen, addressing her colleagues at the session. “None of us are going to be completely happy with what we come up with. But I’m asking all of us to come together as a governing body and move this process forward.

“Those who work for the borough deserve better and safer facilities than they currently work in,” she said.

For Rodriguez, who chairs the facilities committee, the top priority is a new police station. He outlined a plan for a new, 5,000-square-foot headquarters to be erected just to the west of the existing structure, in what’s now a parking lot, on Fisk Street.

He advocated for a one-story building with a basement that does not disturb the existing radio tower on the site.

“If we can build a police station without disrupting the current police station, in my opinion that’s the priority,” Rodriguez said.

A new, separate community center could be built as “basic construction, nothing fancy,” on the site of the basketball court or little-used tennis courts, but with “high ceilings, potentially 25-foot” and bathrooms accessible to park users, Rodriguez said.

That plan also appeared to have unanimous support from other council members at the August session.

More recently, the council began narrowing its choices regarding the DPW site.

At a regular council meeting Monday night, borough Engineer Rich Gardella presented two positioning sketches created by the borough’s contract architect, Eli Goldstein, to show how, “if  we push the building [south], how does everything else kind of fall into place?”

Both showed a new building just south of the existing structure, oriented with the garage bays facing either north or west. The concepts maintain some wooded buffer to the south, as well as the existing police impound yard, salt dome and fueling station.

Allen Street resident Rebecca Lomba said she was worried about noise and diesel fumes if the facility is shifted south, and asked for additional landscaping to minimize it.

“It’s really right on our doorstep,” she said of the operations.
Maple Avenue resident Andy Trocchia said he’s “not convinced” that configuring the project to create lots that can be sold makes long-term sense. More homes means more children who have to be educated, at “considerable” taxpayer cost, he said.
“I suggest you locate the building where you think it fits best, without the consideration of future residences, allowing that space to be buffer space,” he said.

Both concept plans are now under review by the facilities committee in what will be “a long process,”  Rodriguez  told redbankgreen.