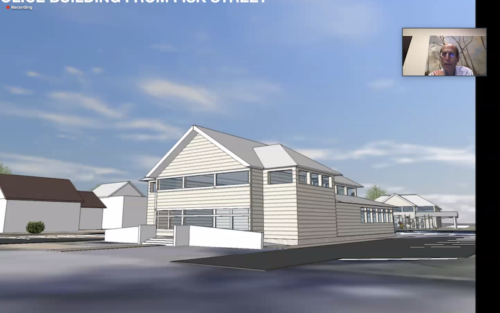 A concept drawing of a new police station on Fisk Street, above; below, an aerial view superimposing the station at top, as well as a new rec center and parking lot. (Visuals by The Goldstein Partnership. Click to enlarge.)

Fair Haven residents got their first peek at concept plans for a trio of new borough facilities Tuesday night.

They also got the first hint of what some of it might cost. 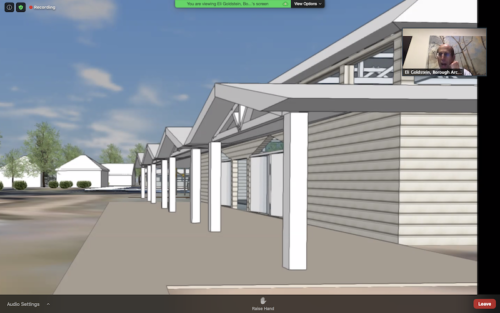 A detail of the proposed rec center, above, and site plan for the DPW yard, below.(Visuals by The Goldstein Partnership. Click to enlarge.)

During the council’s semimonthly meeting, conducted via Zoom, architect Eli Goldstein and his staff unveiled concept plans for a new police station, on Fisk Street; a new 9,000-square-foot rec center just to the south of the station, with a dedicated parking lot accessed from Third Street; and a new public works complex on the opposite side of Third, between Allen Street and Maple Avenue,

Responding to a resident’s question about cost, Mayor Ben Lucarelli said the police station and DPW project were estimated at a combined $11 million; that does not include the rec facility, which he said had not yet been priced out.

“The borough will get the biggest bang for its buck if we put all three projects out at once,” he said. But the police station, he said, remains the top priority.

He said financing of the plan would be “revenue neutral,” with new debt, at favorable interest rates, replacing obligations now nearing their final payments.

“Right now, there’s a zero impact on taxpayers, more or less,” of the proposed projects, he said. “The rec center would be a nominal addition to that.”

Among the highlights of the plans:

• The construction of a two-story, 3,565-square-foot police station with a one-vehicle sally port, surrounded on three sides by parking for 33 vehicles.

It would be located just a few dozen feet from the present station, a former segregated schoolhouse that is outdated and infested with black mold.

Facilities committee chairman and Councilman Chris Rodriguez advocated last month for a one-story building with a basement, in order to blend into the existing neighborhood. But Goldstein said both the proposed station and rec center were scaled to fit in with nearby homes.

• The center’s centerpiece, a basketball court, could be used as three pickleball courts in winter, Goldstein said. Its restrooms would be accessible from both inside and outside the building, depending on which doors were unlocked.

The new parking lot would fit 27 vehicles, up from the present 6 at a small lot on Third Street. The lot’s driveway would line up with Allen Street.

• After a general consensus among council members last month that the DPW administration and garage should be sited on the southern end of the 2.3-acre yard, Goldstein’s proposal showed it at the northern end.

In fact, it would be the same structure, and in the same location, as proposed in early 2019, he said. That placement, he said, would allow for the creation of a new drive-thru recycling drop-off area on the southern margin of the yard, with a 15-foot-wide lane connecting Maple and Allen.

Homes on Maple and Allen would be shielded from noise and light from the yard by landscaped berms, he said.

Previous rounds of discussion about the public works yard makeover focused on the possibility that the town could sell unused land as residential lots to offset project costs. But at Tuesday’s meeting, Lucarelli told Councilwoman Betsy Koch that it wasn’t yet clear how many building lots might be available at the southern end.

Last month, Lucarelli said that officials have “stepped away from” the idea of selling off the southern portion for residential development in order to focus on “how to deliver a new facility at the best possible cost.”

The council took no votes on the plans, which Lucarelli said he expects will continue to evolve and be discussed at council meetings in coming months.