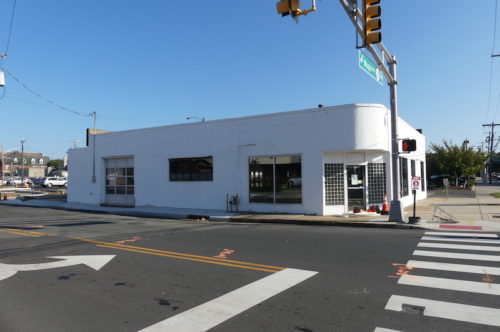 The former home of Atlantic Glass on Maple Avenue is getting a tenant after a long vacancy. (Photo by John T. Ward. Click to enlarge)

A high-visibility Red Bank building gets a makeover for use as a gym; movie screenings return to White Street; and an insurance agency takes over a storefront.

Read all about them in this early autumn edition of redbankgreen‘s Retail Churn. 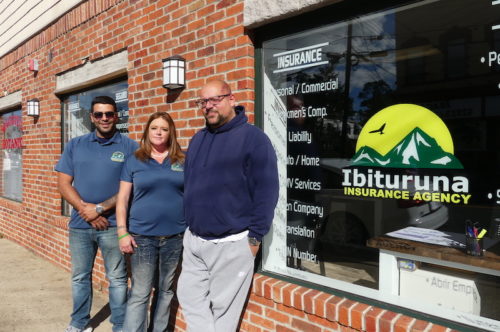 • The former Atlantic Glass building on the southeast corner of Maple Avenue and White Street is getting set up to host a gym.

Alpha Fit won approval from the borough planning office in June to use the space without the need for variances.

Filings show Alpha Fit is owned by Sam Tooley, who has a gym also using that name in Westfield. Tooley, who doubles as a track coach at St. Joe’s High School in Metuchen, did not respond to a request for information on an expected opening date.

The Art Deco building, which abuts the borough’s White Street parking lot – itself now getting a makeover – was purchased from the glass business owners for $1.3 million in September, 2018, by Edison Brine 6 LLC. It has remained vacant since then.

• After a seven-month absence, the movies are back in downtown Red Bank. The former Bow Tie Cinemas space on White Street has reopened for socially-distance film screenings under management by the Count Basie Center for the Arts.

As reported last month by redbankgreen, the Basie took over the lease for the two-screen theater on the hope that moviegoers will return as the grip of the COVID-19 pandemic loosens. The theater is called Basie Center Cinemas.

Now showing: “A Call to Spy,” “The 40-Year-Old Version” and “The Personal History of David Copperfield.”

• Under new owners, Ibituruna Insurance Agency, a 25-year-old business based in the Ironbound section of Newark, has opened a second location, at 101 Shrewsbury Avenue.

From their storefront office, located across the street from the Westboro post office, principals Marcio Silveira, Jorge Morejon and Chemayne Myers provide home and auto insurance, as well as small-business services including payroll management, accounting and translations for clients speaking English, Spanish and Portuguese.