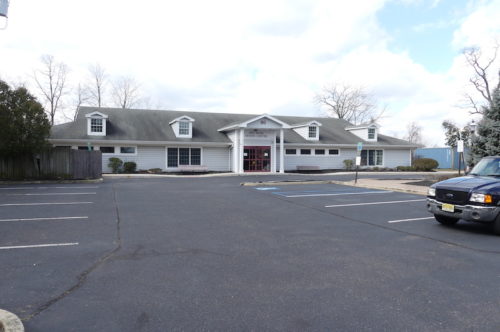 The Senior Center has been out of commission for most of the past two years following a pipe leak. (Photo by John T. Ward. Click to enlarge.)

Tension among Red Bank Democrats over the future of the borough’s Senior Center erupted in public over the weekend.

Joined by Mayor Pasquale Menna, four of the council’s six Democrats lit into the other two, one of whom is the party chairman, as having “placed their own popularity over what’s best for our residents and taxpayers.” 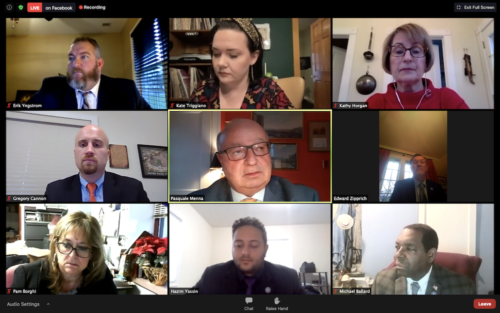 At issue is whether to immediately repair the shuttered Senior Center or allow a Redevelopment Agency review of all municipal assets to work its course.

The Shrewsbury Avenue facility sustained damage when the overhead fire suppression system froze and burst in February 2019. The 25-year-old building has been closed for most of the time since. redbankgreen covered the topic last Friday.

In a statement issued Saturday, five of the governing body’s seven Democrats – Menna and council members Kathy Horgan, Kate Triggiano, Hazim Yassin and Erik Yngstrom – said they were “stunned” that the other two, Michael Ballard and Ed Zipprich, “would politicize our senior citizens, and call them to a rally in the middle of a pandemic, for their own political aggrandizement.”

That was a reference to a rally at the center held Saturday, where protesters chanted “fix it now.” Video of the event is on the Facebook Red Bank Spectator page maintained by Sue Viscomi.

The “majority” Democrats, as they referred to themselves, said Zipprich and Ballard were demanding that $600,000 be spent “to patch up one building,” which “does nothing to remedy Red Bank’s widespread problems across multiple facilities.”

“Continuing to band-aid or make snap judgments about Red Bank’s big problems is how we inherited big problems,” the statement continued. “It’s time for a change.”

Menna has served on the governing body for 30 years, first as a councilman and as mayor since 2007. Horgan is in her fifth three-year term; Yngstrom his second; Triggiano and Yassin are in the final year of their first terms.

On Sunday, Zipprich called the majority’s statement “misleading because Councilman Ballard and I were present at that rally yesterday, but were not the organizers.”

Though Zipprich also serves as chairman of the Red Bank municipal and county Democratic committees, the majority also called his and Ballard’s party loyalty into question.

In a follow-up on behalf of the majority, Triggiano said that instead of working with the majority “on real solutions,” Zipprich joined with Ballard “to work with former Republican councilmembers to spread misinformation for his personal agenda. In our view, Mr. Zipprich’s involvement in the Red Bank Democrats is limited to only his title at this moment.”

Zipprich defended his position on the center, telling redbankgreen:

“I believe we should maintain our assets. History has taught us what happened when the Mayor and previous council members took a long range view of rebuilding the aged DPW facilities and Sunset park. What was supposed to be a 5 year temporary solution in utilizing trailers at DPW has never been resolved. I believe that the Senior Center will languish in a similar fashion as administrators, council members and Mayors change over time.”

As reported Friday by redbankgreen, borough Business Administrator Ziad Shehady said he is recommending against repairs “until more information has been gathered and due diligence performed.”

Ballard said via email Saturday that he disagrees with Shehady:

“I believe repair of the Senior Center at its current location is a worthwhile expenditure of taxpayer monies, as opposed to constructing a completely new building that would incur costs to potentially move a park, reconfigure a road and then build a completely new structure.  Taxpayers would be funding a massive project at a cost that would far exceed the cost to simply repair the current Senior Center.”

On the council’s agenda Wednesday is a three-year lease, at $2,000 per month, with Trinity Episcopal Church on White Street, to host senior activities once the pandemic eases. Shehady said last week that the church space provides “the same level of service” to seniors as the borough facility.

“With restrictions on indoor gatherings and social congregations due to the pandemic and out of concerns for the health and safety of the vulnerable population to be served, it does not make sense to repair a building that will largely sit vacant at this time,” he said.

In recent months, Ballard and Zipprich have repeatedly clashed with all or most of the other Democrats over a number of issues, including the budget and a leak of emails that exposed tension between Shehady and Zipprich. And Ballard, who until recently served as chairman of the finance committee, has repeatedly accused Shehady of ignoring his requests regarding fiscal matters.

Ballard and Zipprich were re-elected to new terms in a November race in which they ran unopposed. On January 1, Zipprich began his fifth three-year term, and Ballard his second.

The majority’s statement was issued on letterhead previously used by Zipprich in 2017, when Democrats opposed Republicans over a proposed redevelopment of the White Street parking lot.