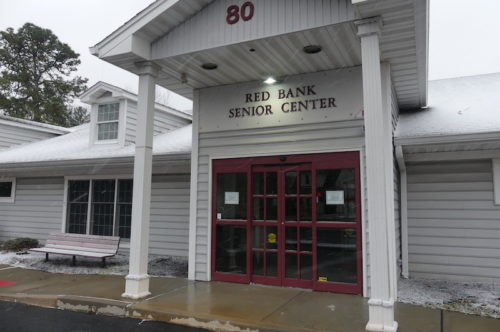 The Senior Center has been out of commission for most of the past two years. (Photos by John T. Ward. Click to enlarge.)

But two years after extensive damage caused by a burst pipe, multiple questions surround the still-closed Shrewsbury Avenue facility. Among them: will it reopen anytime soon, and will it stay where it is? 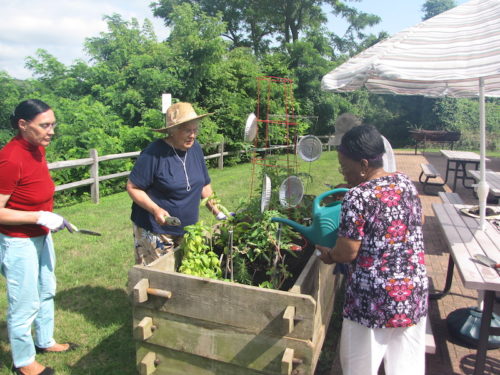 Seniors working a raised-bed garden at the center in 2016. Below, a view of the center’s interior through a window last month. (Photos by John T. Ward. Click to enlarge.)

“Let me just make one thing clear: there is no present or anticipated plan to sell the Senior Center,” Menna said at the borough government reorganization a week ago.

Countering what he termed “deliberate” misinformation, Menna said that “there was never any discernible plan right now or in the anticipated future that I can see for that building to be sold.”

But a near-term reopening of the 25-year-old, single-story facility, which sustained damage when the overhead fire suppression system froze and burst in February 2019, appears unlikely if Shehady continues to hold sway with a council majority.

“It is my intent to fully evaluate operational and financial considerations, and make recommendations to the elected officials, then follow the direction and policies they set,” Shehady said via email. But he is recommending against repairs “until more information has been gathered and due diligence performed,” he said.

Two members of the borough council, however, have been pushing in recent months for repairs so the facility is ready for seniors when the COVID-19 pandemic ends.

Most vocal has been Councilman Michael Ballard, who has complained that Shehady has ignored his calls to begin the process of appropriating funding.

Financially, “we’re flush, we’re very well-leveraged,” Ballard said at a council meeting in November, when he served as chairman of the finance committee. (He has since been removed from the committee by fellow Democrats.) “We’ve talked about bonding for many other things,” including financing for fire trucks, parks and a planned Broad Street makeover, he said.

In addition to a place to socialize, the center provides amenities some seniors don’t otherwise have access to, such as computers, Ballard said.

“The seniors miss it. It’s their home away from home,” he said at the time. “We’re letting it rot, and that’s not our charge.”

After the leak, the pipe and extensive water damage were fixed, using insurance payouts, Shehady said. But “in the course of the repair and upon inspection of the suppression system, other serious deficiencies were found with the fire sprinklers,” prompting Fire Official Tom Welsh to issue a notice of imminent hazard, Shehady said.

That led to a shutdown. Senior gatherings, which had relocated first to the Westside Hose Company, and then back to the center with volunteer firefighters paid to maintain “fire watch,” eventually settled in at Trinity Episcopal Church on White Street, where the borough entered into a month-to-month lease.

Then the pandemic hit last March, ending indoor activities for the seniors, a condition that continues.

In an effort to bring down expenses, plans were redrawn to convert from a “dry” fire-protection system to a wet one. Both types use water, but are pressurized differently, and the change would eliminate the cost of a generator, borough Engineer Laura Neumann of CME Associates told he council. In addition, an effort was made attract bids from local contractors, rather than national operators, which Neumann expected would also reduce the price tag.

In fact, the second round brought in three bids, this time ranging from $192,000 to $267,000. But the council again rejected all as too high. They “substantially exceeded” Neumann’s cost estimate for the project, a resolution said.

Why was the lower price nixed? Because “the bid did not include other costs associated with repairs, to include electric, drywall, insulation, painting, roofing, HVAC, and flooring,” Shehady told redbankgreen.

After that, and with pandemic issues taking priority, the project appeared to stall. Last September, asked by Ballard for a status report, Neumann said she was “awaiting further direction from the council.”

Since then, Ballard and Ed Zipprich have pressed their council colleagues to start the process of providing additional funding. But the other four – Kathy Horgan, Kate Triggiano, Hazim Yassin and Erik Yngstrom – have been largely mum on the issue in public. (None responded to a redbankgreen request for comment sent early Friday; any responses received will be added to this article.) [UPDATE: See January 11, 2021 article.]

The center’s future is further entangled in the work of the borough’s Redevelopment Agency. Among its endeavors is a big-picture analysis of all municipal facilities to determine whether any changes might be made and, ultimately, whether property sales or redevelopment might be recommended.

The agency, Shehady said, is reviewing all the borough’s assets, “financially, operationally,” in terms of parking, provision of service and more.

Both Ballard and Zipprich, however, have invoked the specter of a looming sale concealed by the review.

Among seniors, “their understanding is that the senior center is for sale, and there are entities countywide that are looking to purchase the senior center and put them out,” Zipprich said in November. He did not respond to a request for more detail.

“I’m beginning to feel, as Councilman Zipprich alluded to, that there’s some sort of deal in the works to sell this place,” said Ballard, who was Zipprich’s running mate on a ticket that ran unopposed in the latest election.

Assuming the council approves an anticipated new lease with Trinity Episcopal, the seniors will have a place to gather post-pandemic.

But Shehady said he cannot recommend more spending on the Senior Center, “especially in light of alternative options that exist and have been arranged for to provide the same level of service.

“It should be emphasized that the senior citizen center is mainly a socializing venue and congregation space, something that not many towns in the area have because they are able to utilize shared space,” he said. “Furthermore, with restrictions on indoor gatherings and social congregations due to the pandemic and out of concerns for the health and safety of the vulnerable population to be served, it does not make sense to repair a building that will largely sit vacant at this time.”

Meantime, center Director Jacqueline Reynolds reports monthly on efforts to keep the seniors active and connected, including trips to borough parks this summer and fall, when they played bingo and word games. Now that they’re largely stuck in their homes, Reynolds checks in on them regularly, oversees meal deliveries and more, she said.

“We’re like a family,” she told the council in October.