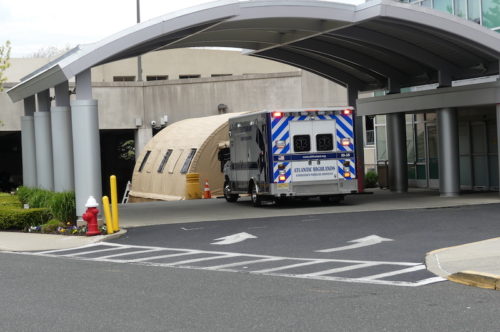 The Emergency Room entrance at Riverview, as seen last May. (Photo by John T. Ward. Click to enlarge.)

As reported Saturday by the Daily Voice, the unidentified 27-year-old victim was wounded in Paterson, 60 miles from Riverview Medical Center, where he landed in the emergency room.

The victim had been shot by a robber near the corner of Putnam Street and Rosa Parks Boulevard, the Daily Voice reported, citing a press release issued Saturday by Passaic County Prosecutor Camelia M. Valdes and Paterson Police Chief Ibrahim Baycora.

How or why the victim wound up at the Hackensack Meridian Health facility was not immediately explained.

Via email Sunday, Red Bank Chief Darren McConnell told redbankgreen that RBPD officers”‘responded to the ER and determined that the incident occurred in Paterson, then turned investigation over to their detectives.

“We knew he was a victim, and there was no reason to believe there was an ongoing threat,” McConnell said.

The severity of the victim’s injuries was not disclosed. According to the Daily Voice, he was transferred to Jersey Shore University Medical Center in Neptune City, and the investigation was continuing.