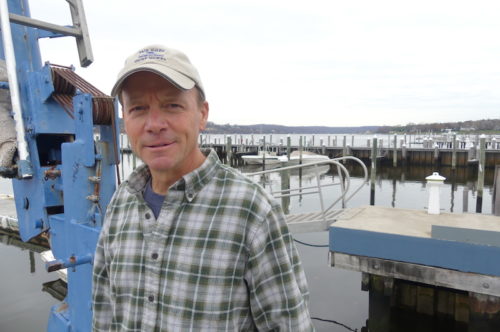 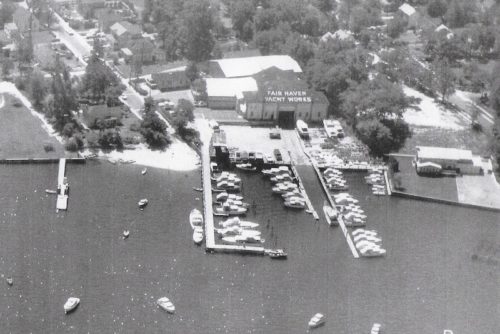 At issue in the lawsuit filed by the borough in early 2018 were conflicting claims about riparian rights in the waters off DeNormandie Avenue, where the marina business has operated since the 1920s.

In a joint statement sent to redbankgreen, the borough government and the yacht works said the settlement “protects and preserves the Borough’s property and riparian rights while also allowing FHYW to efficiently operate an important local business.”

Jim and Molly Cerruti, borough residents who own the marina, and their lawyer, John Greco, did not respond to a redbankgreen request for comment, nor did Mayor Ben Lucarelli. By email, borough Administrator Theresa Casagrande said “the parties agreed to the joint statement as our public comment.”

Jim Cerruti, a former chief of the borough volunteer fire department, previously contended the yacht works was the target of a campaign of harassment by the borough beginning in 2015, 17 years after he and his wife bought the business.

The dispute centered on rights to land covered by water, as granted by the state of New Jersey. The yacht works has a riparian grant that dates to 1902, Cerruti told redbankgreen in 2019.

In 1962, the state granted the borough riparian rights to tidelands at the ends of four streets: DeNormandie, Battin Road, Hance Avenue and Grange Avenue, each the width of the roadway extending a short distance into the river.

At DeNormandie, the grant largely abutted the one owned by the yacht works, but overlapped the far end of a dock known as dock D in a long, slender triangle. That alleged “encroachment” by the marina was the main point of contention in the legal battle.

In 1965, the yacht works was destroyed by fire, but a year later, the borough allowed its owner to rebuild, without any change to the dock’s location. A Red Bank Register report at the time noted that a land-related variance granted by the zoning board “in no way waives the borough’s right to enforce its riparian grant.”

But that right remained unenforced for five decades. In 1976, the marina’s owner sought to do work on the dock and, in applying for a state permit, was also required to obtain clearance from the borough. The borough allowed it, with then-administrator Roy Nelson writing in a letter that the town had “no objection to the continuation of the present encroachment,” a court filing showed.

In 2004, the state granted the Cerrutis a permit for a $500,000 rebuilding of dock D, again without objection from the borough. At least nine other permit requests also met no resistance, court filings contended.

But one day in 2015, Cerruti said, Casagrande showed up unannounced at the boatyard and told him, “you’re trespassing on our property.”

After negotiations, two sides reached an agreement that was ratified by the borough council in the form of a resolution in November, 2015. The deal gave the yacht works an easement to use the area for fees starting at $33,000 per year.

But the DEP rejected the settlement two months later, on the basis that any use of the riparian land other than for public use rendered the 1962 grant “immediately” null and void.

Subsequent efforts to resolve the matter were fruitless, Cerruti said, and the borough sued in state Superior Court to enforce its claim in January, 2018. The settlement says the suit was filed “to protect the residents of the borough in an important property right.”

In its court complaint, the borough said that it had “recently discovered” that dock D encroached on its grant. The discovery, it claimed, occurred as a result of surveys done in connection with the borough’s acquisition of the property now known as the Williams, Albert and Robards Park on the opposite side of DeNormandie Avenue.

But an April, 2018, affidavit by former Mayor Mike Halfacre in support of the Cerrutis appeared to contradict that assertion.

Halfacre, who left office in early 2012, said he became aware of the alleged encroachment in 2009 or 2010, and later told Casagrande, who became administrator in 2011, “that we should leave it alone,” he wrote.

“The encroachment had existed for many years, it involved a local business that was an asset to the community, it was not harming anyone or interfering with anyone’s use of the river, including the Boro’s, or planned use of the riverfront,” Halfacre wrote.

“As Mayor, I believed that starting a legal battle over the encroachment would not be a productive use of the Boro’s precious resources, especially given the fact that the encroachment is not on the land, it is in the river, and it covers an area of only about 2,500 square feet which the borough did not intend to use,” wrote Halfacre, who’s a lawyer.

In court filings, the Cerrutis argued, as the DEP had, that the borough’s riparian grant was void.

In the midst of the lawsuit, the borough separately charged the marina for what it claimed were seven land-based zoning violations.

Cerruti said the action was intended to pressure him over the riparian issue, and the matter wound up in municipal court. There, his company was found guilty of a single violation – failure to build a rainwater drainage swale as directed in 1966. When Cerruti refused to pursue a zoning application to correct the violation in a dispute over jurisdiction and fees, he was fined $1,500.

The yacht works appealed the ruling; that appeal is being dropped as part of the settlement.

The complex, 10-page settlement requires the yacht works to pursue, “at its sole cost and expense,” approvals from the state “so that there will be no area of conflicting riparian rights” and the dock encroachment will be eliminated.

In the process, the marina will be permitted to move boat slips from dock D to an uncontested dock to the west.

The borough has agreed to support the marina’s requests.

The marina’s legal fees, which Cerruti said in late 2019 had exceeded $100,000, are not being paid by the borough under the settlement.